In most cases, when a man is jailed for a long period, his world comes down crashing on him, and all hopes and dreams about life fade away. 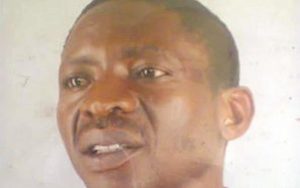 And the situation is especially tough for the man’s wife, if he is married.

Left behind to fend for the children, if any, and face the world alone, many try to brave it for a while, but would soon pick their pieces and move on, finding new love.

In the worst cases, the woman simply packs her bags as soon as the husband is caged and sets off.

But not so for Diana Murindi, wife to MDC official, Tungamirai Madzokere, who was last year caged for 20 years by the High Court following his highly controversial conviction for the murder of police inspector, Petros Mutedza, in 2011.

The two are set to wed.

Madzokere — widely known as Tunga in political circles — and Diana are expected to tie the knot this Saturday December 30, 2017 in the prison — Chikurubi Maximum Prison.

The solemnisation of their marriage will illuminate life behind the dark, impenetrable walls of Chikurubi, proving that there is indeed life and hope after jail.

Madzokere, a former Glenview Ward 32 councillor, was jailed in September last year along with two other MDC officials, Last Maengahama and Yvonne Musarurwa.

The couple obtained a marriage licence at Harare Magistrates’ Court on December 13 and preparations are underway for the ceremony to be hosted at Zimbabwe’s largest correctional facility.

They were part of the original group of 29 Glen View residents who were charged with contravening Section 47 of the Criminal Law Act.

Of that original group, some were found not guilty and released at the close of the State’s case in 2013, while one of the MDC activists Rebecca Mafikeni succumbed to ill health while incarcerated at Chikurubi Maximum Security Prison.

An excited Murindi yesterday told the Daily News that she was meeting with prison officials to finalise on administrative and other issues ahead of the wedding ceremony.

“Our plans were to get married in September last year but unfortunately he was sent to prison but that did not break our plans. I am still finalising with prison officials and from our church on certain issues before the wedding takes place,” Murindi said.

Madzokere’s lawyer Gift Mtisi, a member of the Zimbabwe Lawyers for Human Rights who represented the group together with Beatrice Mtetwa said he had been invited to the event.

“I saw him last week when he was collecting his marriage licence with his wife and he extended his invitation to the wedding. He said the plan is to have the wedding at Chikurubi courtyard and hopefully I will attend,” Mtisi said.

When Madzokere and fellow party officials were jailed, High Court judge Chinembiri Bhunu said Mutedza had not provoked the MDC activists when he was murdered, adding that they were liable for the death.

He also said because their co-accused Musarurwa was female, they would be spared the hangman’s noose.

The new Constitution prohibits the death penalty for all women, as well as men who are under 21 at the time of the crime and those who are over 70.

“Mutedza was a gentle giant who requested that they finish what they were doing and disperse. Though armed with anti-riot gear, Mutedza and his colleagues chose to flee the scene and not attack anyone. His conduct did not warrant such a barbaric attack. A stiff and deterrent sentence is called for.

“Both Madzokere and Maengahama have been spared the death sentence because Musarurwa who committed it with them is a female and cannot be given the ultimate punishment. I also did not want to extend the 20 years as none of the three delivered the fatal blow,” Bhunu said. – Daily News