About 1 000 children and elderly people in Binga District were treated to an early Christmas when First Lady Auxillia Mnangagwa hosted a party for them here yesterday. 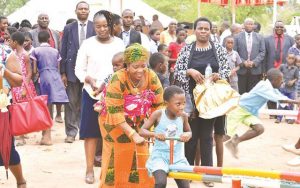 Mrs Mnangagwa carries baby on her back

The party was held at the Catholic-run Sunrise Children’s Home, itself home to 15 orphans, at Binga Centre. It was a magnificent occasion where children drawn from various parts of the district were served rice and chicken as well as two-piecer portions each, supplied by Chicken Inn.

After her address, the First Lady took time to play different games with children at the home’s play centre, much to the excitement of scores of the elderly and public officials, who included Minister of State for Matabeleland North Province Cde Cain Mathema, Chiefs Saba, Siansali and Sikalenge as well as heads of various Government departments and Zanu-PF provincial party members.

The crowd ululated and whistled when the First Lady strapped one of the orphans, 18-month-old Denzel Raphael to her back as she joined in children’s games.

Besides food, children and their families received an assortment of groceries and clothes donated by the First Lady. In her speech, Cde Mnangagwa chastised child sexual abusers for violating kids.

“I dedicate this day to be with disadvantaged children here. This is my first time to be in Binga and I have come to hear your problems. I want to thank Sunrise Children’s Home for organising this day. We want these kids to be like their counterparts elsewhere and all I can say is that this is not partisan as I am a Gogo (Mbuya) for all children in the country,” she said.

The First Lady decried the high rate of sexual abuse and domestic violence, saying Government will ensure that offenders are severely punished.

“What I want to say to men is that the rape of these kids should stop. We should also shun domestic violence and I want to reiterate that I am happy that MP Prince Dubeko Sibanda (Binga North) is here; we will both push Parliament for the betterment of Binga,” she added.

The First Lady commended the Department of Social Welfare for championing the needs of disadvantaged children but warned citizens against deliberately dumping children so the department takes care of them.

The orphanage matron, Sister Faustina Rumuma, said the home was opened in May 2014 and now has 11 orphans committed to it as well as four others who are housed during the holidays.

She said they were facing challenges of high water and electricity bills as well as lack of transport to take the orphans to hospital for routine check-ups fortnightly.

“We appreciate the presence of the First Lady. As a children’s home we are here to provide emotional, social and physical support to vulnerable children,” she said.

The children, Sister Rumuma added, are trained in lifelong skills such as gardening and poultry.- state media