Prison officers stationed at the Zimbabwe Prisons and Correctional Services’ head quarters said the new government should establish a commission of inquiry which would investigate their boss,Paradzai Zimbondi,for corruptly promoting his cronies. 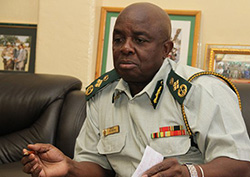 According to an anonymous letter which is circulating at ZPCS’s Mbuyanehanda head offices, officers are not happy with the criteria which the organization uses to promote workers.

The letter says officers are bitter with Zimondi’s biased and corrupt promotions which have been going on since his  arrival at the institution almost two decades ago.

Below is part of the anonymous letter

Some officers who are 20 years and above in the service are still occupying very junior offices and ranks but throughout the years promotions have been conferred to mostly those related to Zimondi and his allies .In fact they promote their kith and kin in very corrupt ways and officers are disappointed by the media which do not cover this longtime corruption.

ZPCS has collapsed and deteriorated to Stone Age, ancient period.

For example the Chinamasa (Finance minister) relatives who joined the department 5 to 10 ago are now Chief Superintendents and Assistant Commissioners and they did not get these ranks t through merit but through corrupt and nepotism.

The Zimondi relatives have also been promoted to various senior ranks disadvantaging the rightful people due to massive corruption.

We are therefore requesting his excellence President Emmerson Mnangagwa to urgently set up an inquiry to determine the depth of this corrupt and institutional capture by this overstayed ZPCS management.

Even other assets meant to benefit inmates and officers have been diverted over the years for personal gain.