“If his body was burnt, why is it that the wreckage of the car does not show any burns?” 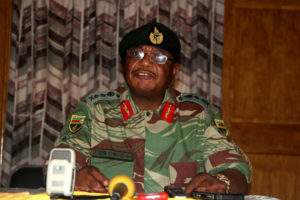 What will now happen to the woman who was with the late Gen Josiah Tongogara following her denials that the hero was assassinated? Will she be interrogated? These questions hovered in the community yesterday as the Zimbabwe’s new Vice President Gen Constantino Chiwenga made the clearest hint that the late commander was killed in December 1979.

Another revelation previously unknown to many Zimbabweans, is that Gen Tongogara was also President Emmerson Mnangagwa’s brother in law and these details are now coming out weeks into Mnangagwa’s presidency. Two years ago when the then Mugabe controlled broadcaster, ZBC published a story attacking ZimEye.com over the Tongogara assassination revelations, the ZBC soon deleted the article from their archives. 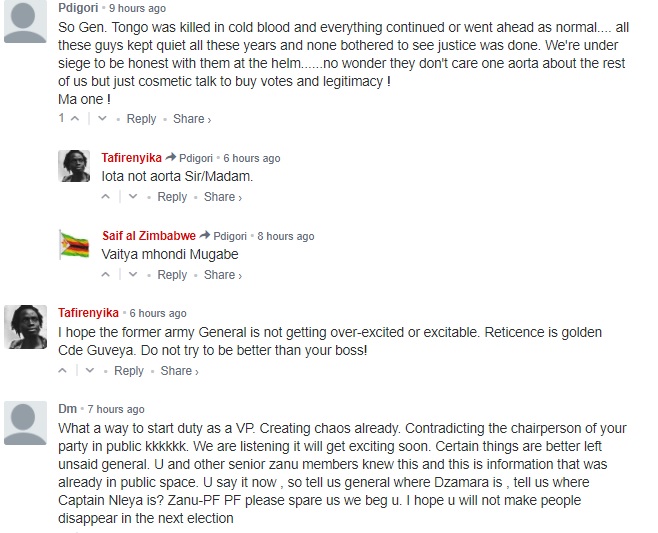 The ruling ZANU PF Second Secretary and Vice President, Chiwenga yesterday spoke while addressing scores of friends and relatives who attended a memorial service held at the National Heroes Acre in Harare on Boxing day.

“General Tongogara opened to us that he was likely not going to make it to an independent Zimbabwe as he was unpopular with some people in the struggle and he indeed died on the even of our independence,” he said.

Chiwenga is the first among the ZANU PF top leaders to openly hint that Tongogara may have been murdered and foresaw and spoke about his imminent death way ahead of time.

Some of Tongogara’s children residing outside Zimbabwe in 2013 told the weekly Standard that only the truth of what happened to their father would bring closure to the family and the whole nation.

They doubted Oppah Muchinguri’s official version which says that their father died in an accident on December 26 1979.

“There are so many glaring inconsistences about what happened to our father. You can tell they [Zanu PF Officials] are lying,” said one of the children. “We want the truth to come out in order to bring finality to this issue.”

Another child said the images of Tongogara’s body depicted a burnt body not congruent with an ordinary side-swiping of the late general’s vehicle as official versions of accounts say.

“If his body was burnt, why is it that the wreckage of the car does not show any burns?” asked another Tongogara sibling, adding that from what the family had gathered from “credible sources”, some parts were missing from the body.

Michael, Tongogara’s elder brother, confirmed that the family was still in the dark about what happened.

He said up to now Tongogara’s personal belongings, including his knobkerry and other traditional artefacts, have still not been returned to the family.

Michael said when he was flown to Maputo to view his young brother’s body, something inexplicable happened, signifying that something was amiss in accordance with African traditional beliefs.

“All I can say is that when his coffin was opened for me at the mortuary, his body wept (mutumbi wakasvimha misodzi), then I just left,” said Michael.

He said even if the family was not satisfied with the explanation of what happened to Tongo, there was nowhere they could complain, hence the best was to remain quiet.

Michael said the family was of the opinion that Tongo’s children were being neglected by the government and the Zanla commander’s former close friends and compatriots.

He said while Tongo had four children with Angeline, namely Hondo (born 1969), Tichafa, Bvumai and Nyaradzo, he also sired six other children with different women.

These are Conrad (born 1963) who is the eldest of all Tongogara’s children, Sukai, Simba, Tichaitora, Annie and Granger.
Michael said most of Tongogara’s children were struggling to survive, with some unemployed despite the sacrifice made by their father and the closeness the national hero was to several senior government and party officials.

He said after his death, close friends, among them the late Retired General Solomon Mujuru and the late Chief Air Marshal, Josiah Tungamirai, virtually cut links with the family.

“Rex [Mujuru] was very close to Tongo after we recruited him from Zipra. With Tungamirai, they used to dress like twins,” said Michael.

“All these were Tongo’s people, but after independence no one came to us to see how the family or children were doing. Maybe there is something they are afraid of,” said Michael.

The death of Tongogara attracted a lot of speculation in independent Zimbabwe. Some suggested that his death supposedly in a car crash in Mozambique, a few weeks before ceasefire and independence was suspicious.

Zanu PF women’s league boss, Oppah Muchinguri, sat behind Tongogara in the same truck with four others. Tungamirai and others were in a front car. Muchinguri survived without a scratch.

In 2002, Muchinguri told Moto magazine that their vehicle side-swiped a trailer of another truck before rolling twice, resulting in the instant death of Tongo.

But readers responded that the story had many loopholes, including why their vehicle had no spare wheel for such a high-powered delegation.

Michael said he was surprised to hear from the rumours that the army on Boxing Day organised commemorations for Tongo without consulting him or his other siblings, sisters; Annie, Rossie and Edna and young brother Joshua, as well as most of his children.

Michael questioned the involvement of Angeline and her daughter Nyaradzo in the army commemorations.

He said Angeline should not “masquerade” as a member of the Tongogara family, as the late guerrillas never married any of the seven women he sired children with.

“He had many girlfriends and children, Angeline being one of them. His philosophy was that we should produce as many children as possible, so that some of them would become liberation fighters,” he said

Michael said Nyaradzo was not yet known to the Tongogara family, as she was yet to be formally introduced to it, 33 years after she was born.

Moreover, the family believes that after 1980, Angeline married the late businessman, Cuthbert Moyo, whom they knew from the Zambian days.

Contacted for comment, Nyaradzo said she and her mother would only respond to questions in writing.

I was close to Josiah: Brother

Michael, who was based in Zambia during the struggle and is still an active Zanu PF member, said he was close to his brother.

He produced several letters from Tongo asking him to take care of his children even in the event that he died.

In one of the letters, dated December 4 1978, Tongogara wrote from Mozambique to his elder brother outlining his trials and tribulations with the war of liberation and his concern for Zimbabwe and his family.

Wrote Tongogara: “Budi early next year Amai Hondo is supposed to come to Maputo to stay. The party has decided that all officials should have their ‘[wives]’ in Mozambique in order to solve a number of problems. So I feel when all is set, she should bring with her two kids, Bvumai and Sukai. You remain with two boys Hondo and Tichafa. I want the two young ones for one simple reason, because they are young and can easily catch up with Portuguese, though they will be integrated with other English-speaking children.”

Michael said the late Vice-President, Simon Muzenda, helped to write supporting affidavits to enable Tongogara’s children to get birth certificates as he knew them and their mothers.