Heal Zimbabwe stands in solidarity with Mthwakazi Republic activists’ call for Truth and Justice for Gukurahundi.  We strongly condemn their arrest, torture and continued detention. The activists should be allowed to exercise their democratic right to demonstrate and petition as provided for in section 59 of the Constitution of Zimbabwe. 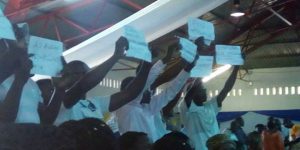 The activists were demonstrating for justice, truth, healing and reconciliation during a prayer meeting held at Zimbabwe International Trade Fair (ZITF) in Bulawayo, which was officiated by President E.D Mnangagwa on the 31st of December 2017. The youth were detained at Bred Barracks for 5 hours where they were assaulted and later handed over to the police. They appeared in Court today, 02 January 2018 but  their charges were withdrawn after the police failed to bring them before the court in the stipulated 48 hours. All the eight youth sustained injuries from the assault.

It is Heal Zimbabwe’s view that as long as key reconciliation issues such as Gukurahundi remain unaddressed, the country can never achieve wholesome and meaningful healing and reconciliation. Instead of crushing demonstrations on Gukurahundi and traumatising an already traumatised populace, the new administration must without hesitation, take the initiative to encourage truth telling so as to bring closure to this emotive reconciliation issue.

Heal Zimbabwe notes with great concern, the unconstitutional role by the military in arrests and torturing of citizens. This runs contrary to the assurance by the CDF Let General Valerio Sibanda on the 18th of December 2017 that the military were going back to the barracks. The maintenance of law and order, especially dealing with eight unarmed civilians, is the responsibility of the police.

Heal Zimbabwe notes that the issues raised by the activists are not knew. Chapter 12, section 252 of the constitution provides for the National Peace and Reconciliation Commission (NPRC) with the mandate to (c) “bring about national reconciliation by encouraging people to tell the truth about the past and facilitating the making of amends and the provision of justice, (d) to develop procedures and institutions at a national level, (e) to develop programs to ensure that persons subjected to persecution, torture and other forms of abuse receive rehabilitative treatment and support, (f) to receive and consider complaints from the public and take such action in regard to the complains it considers appropriate.”

Zimbabwe’s history is tainted with incidences of unresolved cases of politically motivated violence and Heal Zimbabwe appreciates that without a functional NPRC complimenting other interventions that seek to build peace in communities, total peace, reconciliation and social cohesion can never be achieved. Heal Zimbabwe notes that as the 2018 elections draw closer, the absence of the NPRC presents a ticking time bomb of a possibility of violence erupting in communities.

In light of the above, Heal Zimbabwe recommends that:

2. The President in consultation with the Judicial Service Commission and the Committee on Standing Rules and Orders appoints a substantive chairperson of the NPRC to replace the late Cyril Ndebele.

3. The Government establishes an effective and independent mechanism for receiving and investigating complaints from members of the public about the misconduct of the members of the security services in compliance with section 210 of the constitution of Zimbabwe.

2. The NPRC must carry out robust programmes on the need to prevent conflict and the promotion of peace before the 2018 elections.

3. The NPRC must set up an early warning system in partnership with other key stakeholders such as civil society and the church for early detection of areas of potential conflicts and disputes, and to take appropriate preventive measures.

5. Assure the security of witnesses during the Public hearings.

6. Craft, recommend and implement policies and legislation which will facilitate institutional reform, restorative justice, truth recovery and telling and establishment of community and national memorials.

7. Ensure and facilitate the documentation and sharing of multiple narratives of Zimbabwe’s history.