Emmerson Mnangagwa’s post-Mugabe regime is consolidating its powereven as it takes steps to open the economy. To that end, the new president has appointed as his vice president the former army chief, Constantino Chiwenga, the man who orchestrated the coup against Robert Mugabe that brought Mnangagwa to power. 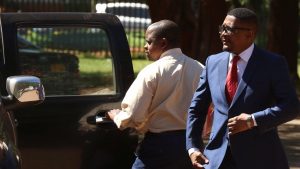 Former Minister of Foreign Affairs Walter Mzembi is escorted by a detective during his appearance at the Harare Magistrates Court in Harare, Zimbabwe, January 6, 2018. Philimon Bulawayo/Reuters

Further, Mnangagwa has announced the arrest of two ministers who supported the efforts to make Mugabe’s wife Grace his successor. Former foreign minister Walter Membi and former energy minister Samuel Undenge have been charged with “criminal abuse of office.” Former finance minister Ignatius Chombo has already been arrested, but all three are free on bail. Finally, Mnangagwa has ruled out any possible coalition arrangement with perennial opposition leader Morgan Tsvangirai, who is fighting colon cancer. Mnangagwa has, however, offered official help with Tsvangirai’s medical bills.

In Harare and Bulawayo, Zimbabwe’s largest cities, the military has replaced police at checkpoints. Soldiers are better paid than police officers and are perceived to be less venial with respect to bribes and shakedowns. So, the substitution is likely to be popular with the general public and will also strengthen the new administration’s control of the country.

Mnangagwa’s biggest break from Mugabe so far is in his concrete steps to revive Zimbabwe’s collapsed economy. To that end, he is seeking international investment and loans from international financial institutions. To bolster international confidence, he has started to return seized farms to white owners and his spokesman is saying that “land reform is over.” The Mugabe ban on foreign ownership of Zimbabwean assets has also been lifted, with only a few exceptions. Nevertheless, Mnangagwa and Chiwenga are both notorious for violating human rights while serving as Mugabe’s “enforcers,” most notably in the early 1980s in Matebeleland and in 2008 during elections. Chiwenga’s elevation to vice president is a signal that little has likely changed in the character of Zimbabwe’s leadership.

In the short term, Mnangagwa’s strategy of economic liberalization while maintaining Mugabe’s illiberal political system (despite some new faces at the top) is likely to work. It may encourage him to proceed with national elections in 2018, as international opinion is pressuring him to do so.