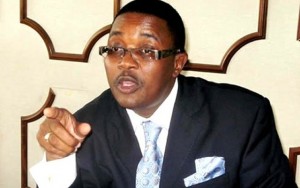 Former Foreign Affairs Minister Walter Mzembi is challenging corruption charges leveled against him by the state saying that he is  being persecuted by  President Emmerson Mnangagwa.

Mzembi was arrested by the Zimbabwe Anti-Corruption Commission (ZACC) last week on and charged with abuse of office and corruption.

ZACC said Mzembi’s charges emanated from the government sourced TV sets which he donated to church organizations in 2010 during the World cup.

Through his attorney Job Sikhala, Mzembi said he did not steal anything from the government and that he was actually a victim of political persecution.

Mzembi was arrested together with former Energy minister Samuel Undenge and they two were released on bail.