Harare: The outgoing Crisis in Zimbabwe Coalition board led by Sally Dura handed over power to the new elected board during a handover ceremony held at the Zimrights Boardroom in Harare. The Rashid Mahiya-led board, officially elected on the 14th of December 2017 in Bulawayo, assumes its oversight role. 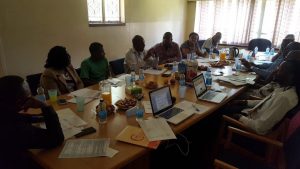 Proceedings at the handover meeting

Speaking at the inaugural board meeting, outgoing Advocacy Committee chairperson, Mr Marvelous Kumalo noted that; “the Crisis in Zimbabwe Coalition’s leadership renewal at the Annual General Meeting of 14 December at Rainbow Hotel in Bulawayo, represents a democratic tradition that we have consistently practiced over the last 16 years of our existence as a coalition. I am proud together with my outgoing team to handover the leadership of the Coalition to a promising leadership that has the mandate of the Coalition’s members.”

“Your leadership comes at an important juncture in the history of our beloved nation, at a time when civil society is compelled to act on the governance crisis in Zimbabwe  and when the current government which rose out of a military coup is threatening civic voices and brutalizing those that demand accountability as we recently witnessed in Bulawayo,” added Kumalo.

The outgoing chairperson also presented a number of initiatives that the Board implemented during its two year tenure that included convening the National People’s Convention, popular political advocacy in 2016 as well as instituting an institutional strengthening programme that has seen the Coalition devolve into 5 regions across the country.

Speaking to the Crisis Report the incoming chairperson indicated that the relevance of the Coalition is now more than ever and his Board will provide thought leadership and actively mobilize citizens to demand a restoration of the constitutional order following a military coup on 15th November 2017.

“We will keep the government on its toes as we demand political reforms, a return to the rule of law and human rights. We will demand that the state urgently arrests the economic crisis in this country and ensure that there are social safety nets for citizens. As we head towards the 2018 elections, our task is to pressure the government to reform the electoral environment and ensure a credible, free and fair election in 2018.”

“Our tenure will also witness improvements in coordinated civil society actions as we will build relations and reach to our partners in the democratic alliance based on mutual consent and the bigger picture that we want to see in this country. Working together as a collective will yield more results as we saw in the past. Our leadership is here to serve and our arms are open to those that want to cooperate with us and share the same vision of a democratic society.”

Speaking at the same ceremony, chairperson of the Gender and Women’s Rights Committee Dr Rita Nyampinga had this to say, “I applaud the coalition members for maturity as they elected a gender sensitive board that currently has a 50% representation of women and complies with Section 52 of the national Constitution. We will ensure that there’s gender parity and representation in the Coalition and that women’s issue form an integral part in the Coalition’s work.”

​Proceedings at the handover meeting

Chairperson: – Rashid Mahiya, Heal Zimbabwe Trust Executive Director. He takes over from Sally Dura of the Women’s Coalition of Zimbabwe.

The board also consists of chairpersons from the following 7 committees:-

3.       Gender and Women Committee chaired by Dr Rita Nyampinga of the Women’s Coalition of Zimbabwe

7.       Media and Information Committee chaired by Tawanda Chimhini of the Election Resource Centre.