If you’ve ever complained about being forced to sleep in an airport after a delay, spare a thought for one Zimbabwean family who have finally left Bangkok’s Suvarnabhumi airport where they’ve lived for the past three months. 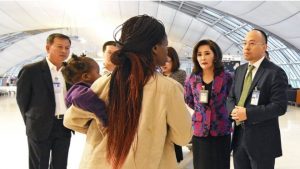 The family – four children under the age of 11 and four adults – first arrived in Bangkok in May.

When they tried to leave in October for Spain, they didn’t have the right visas.

They couldn’t legally re-enter Thailand as they’d overstayed their tourist visas and had to pay a fine. But they said they could not return to Zimbabwe because they faced persecution.

The family’s situation came to light when an employee at Suvarnabhumi airport posted a photo of himself with one of the children in December saying they were living there “because of the unsettled situation” at home.

Officials at that time explained that they’d tried to help the family make arrangements with Ukraine International Airlines (UIA) to fly via Kiev to Dubai instead – and then on to a third country – bypassing European immigration.

But according to a UIA spokesperson, the family cancelled their tickets for the final leg of their journey, leading them to be sent back from Dubai to Bangkok.

The family asked for assistance from the UN, saying they feared persecution in Zimbabwe after the November unrest which saw the removal of long-term leader Robert Mugabe.

The UN said a the time that it was “exploring options”. Thailand does not provide legal status to refugees and asylum seekers.

Meanwhile, the family stayed inside the departure area, being looked after by airport staff.

According to a Thai immigration bureau spokesman, they finally left Bangkok on Monday afternoon.

Pol Col Cherngron Rimphadee told the BBC’s Thai Service that the family had departed for the Philippines. A UNHCR refugee camp is located there, but it was not clear whether it was their final destination.

A UNHCR spokeswoman told the Coconuts website that the agency would not comment on individual cases.- BBC