My deep condolences to the Bennet family on the untimely death of Roy and Heather in a tragic air accident in North America. We the MDC family have been robbed of a gallant fighter for human rights, democracy and good governance. 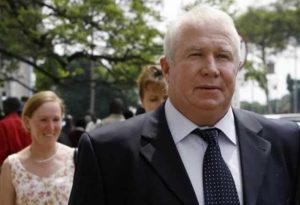 Roy touched the lives of many people particularly in Chimanimani where he was farming. He provided the Chimanimani community with livelihoods – jobs, water, food, roads, health services and you name it. He was a philanthropist who was endeared to his people. So much so that they gave him a Shona name ‘Pachedu’. Roy was instrumental in the formation of the MDC in 1999 when he became the Provincial Treasurer for Manicaland. He and others in Manicaland formed MDC structures in the formative stages of the party. Roy bought the MDC its first provincial office in a leafy surburb in Mutare. Through his hard work Manicaland is up to this day, arguably the strongest MDC provincial stronghold with full fledged structures in all the districts from Nyanga to Hauna, Mutasa to Makoni. From Mutare to Chimanimani, Chimanimani to Chipinge. From Chipinge to Buhera. That is the legacy Roy left in Manicaland where he was a successful farmer

His Chimanimani farm was invaded and taken in 2000 and he moved to his other property in Ruwa near Epworth. By then I was the MP for Epworth so he would pass through Epworth to his house in Ruwa and we used to joke that he was ‘trespassing’ By then Roy was now in Parliament representing Chimanimani. During one of the debating sessions Patrick Chinamasa made some sensitive racial remarks which did not go down well with Roy as he did not tolerate racism. He sat calmly in his chair. It was Hon Nelson Chamisa who said to Roy ” sekuru vanhu ava vaakukujairirai manje” and Roy sprang up towards Chinamasa and floored him down right in the Chamber. For this incident Roy was sent to Mutoko prison. While in prison his wife Heather was hounded by Zanu PF militias who continued to harass her at her Ruwa farm. This led to her having a miscarriage. So sad.

In 2005 MDC split and Roy remained with the mainstream Morgan Tsvangirai led MDC. We had to rebuild the fractured party. At the 2006 Congress, Roy was elected MDC Treasurer General. I was elected Deputy Secretary General. The new National Standing Committee restructured and re-organized the party and MDC became rejuvinated and much stronger than before. Hence the MDC won the 2008 elections. Thanks to Roy Bennet and his contribution to this victory.

At a very personal level I knew Roy as a strategist and somebody who loved flying. In 2004 President Tsvangirai had an interview with SABC in South Africa and in that interview he urged the South African government to use its economic muscle to force Mugabe to resign. This did not go down well with Harare. A warrant of arrest was issued and the Harare airport was heavily deployed. Whilst the security agents were busy waiting for Tsvangirai at the Harare International airport, Roy Bennet called me from South Africa requesting me to receive him and Tsvangirai at an airstrip in Irvine Farm outside Harare. I complied and together with Timothy Mubawu we drove in my car then a brand new red nissan hardbody double cab, which at some stage Nelson Chamisa had borrowed on an errand to the UZ. I later learnt that he was on a courtship mission. Back to Roy, his light aircraft landed on the airstrip and Morgan emerged. I whisked the party to Morgan Tsvangirai’s modest house in Ashdown Park. Within minutes of his arrival Morgan addressed a packed Press Conference daring Chihuri to come and arrest him. The rest is history.

During the inclusive government, Bennet was the MDC deployee to the Ministry of Agriculture as Deputy Minister. By that time Bennet had escaped to South Afrika after his release from prison in 2007. Mugabe refused to swear him. Again the rest is history. So Bennet continued working as MDC Treasurer in exile in South Africa. During that period there was a massive exodus to South Africa of MDC activists fleeing from political violence in Zimbabwe. Roy Bennet mobilized humanitarian assistance for all MDC refugees in SA. For those who wanted to return home he gave R1000 to each.

During the time of his death Roy was still living in exile and had moved to Zambia to pursue his passion for farming and I am told he was doing very well. Fare thee well Roy Pachedu. Fare thee well Heather. Guys you fought a good fight all for the love of Zimbabwe. May your dear Souls rest in eternal peace.