In a dormitory at Zimbabwe's most prestigious university, the water supply is so erratic that students must sometimes queue up at communal taps. Rooms are overcrowded, housing up to four times as many students as their capacity. 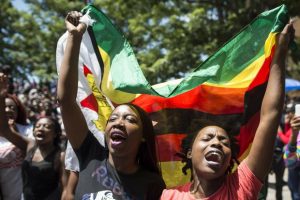 “It’s like a squatter camp,” says Antony Mukuwamombe, a 23-year-old accounting student in his fourth year at the University of Zimbabwe.

His friend, 19-year-old Nick Chauke, gestures at the overgrown weeds and litter on a campus lawn. “It feels like we’re in the bush,” he grumbles. “Look around here. If standards keep dropping, will my degree be worth much?”

Zimbabwe’s education system was once reputed to be the best in Africa. Its schools and universities expanded at a spectacular rate after independence in 1980. Its teachers were highly respected, creating some of the best-educated graduates on the continent, including thousands of doctors, lawyers, engineers and corporate executives.

This once-lauded system has badly eroded in recent years, sliding into a crisis that threatens the country’s future. Universities are overcrowded and poorly equipped. School dropout rates have soared. Many teachers have quit the profession or emigrated, unable to survive on their low salaries. Math textbooks are shared by an average of six students per book.

The education crisis is a huge challenge for the military-backed regime that took power last month. The new government, appointed by President Emmerson Mnangagwa after a military coup that triggered the departure of long-ruling autocrat Robert Mugabe, is now preparing for a crucial election in the first half of this year. The ruling party is almost certain to win the election, with the army’s assistance, but it must then tackle the social and economic problems that proliferated in Mr. Mugabe’s final years in power.

Education was perhaps the greatest achievement of the Mugabe government’s early years. Primary-school fees were abolished and thousands of new schools were built. Primary-school enrolment expanded to 2.1 million from 1.2 million in the decade of the 1980s. Secondary-school enrolment grew at an even faster rate, to 673,000 from 73,000 in the same decade. Zimbabweans became famous in southern Africa for their high level of education.

But by the late 1990s, the Mugabe government had fallen into economic and political crisis. Authoritarian rule and economic mismanagement inflicted heavy damage on the country. In primary schools, funding per student fell by a third in the 1990s, and school fees became common again. Hyperinflation erupted from 2006 to 2008, forcing many teachers to abandon their jobs to seek other ways of survival. Many schools closed. An estimated 20,000 teachers left the country, and dropout rates rose dramatically.

Universities have been badly hit too. The government has cut funding to the postsecondary sector and reduced its grants and loans system for students. Some universities have responded by increasing their student intake as a revenue-generating scheme.

Tuition now is about $1,000 (U.S.) per year in most faculties – a huge amount in a country where the GDP per capita is only about $1,000 annually. Thousands of students have dropped out of university because they can’t afford the cost.

“Education has been privatized, and only the rich can afford it,” says Makomborero Haruzivishe, secretary-general of the Zimbabwe National Students Union.

“The government is dismantling the pillars of education that made Zimbabwe famous.”

While housing on campus is crowded, the conditions are even worse in the off-campus hovels where most students end up residing. Four-bedroom houses are shared by up to 38 students, sleeping in shifts.

Some students have become so impoverished that they turn to crime or prostitution to survive. “They’re forced into transactional sex to pay for their fees,” Mr. Haruzivishe told The Globe and Mail in an interview. “The situation is desperate.”

Other students have become street vendors. One friend of Mr. Haruzivishe survives by buying containers of used cooking oil from a fast-food restaurant and reselling it on the street.

Tawanda Sibanda, a 22-year-old public administration student at the University of Zimbabwe, says it took him a year to raise the money for his tuition fees. He finally found a relative from whom he could borrow the money.

He complains of obsolete textbooks at the campus library. “Sometimes there are missing pages, or the books are from the 1970s, or the journals are outdated,” he says.

Mr. Chauke, the 19-year-old first-year student, says the campus has become much more crowded because of the university’s decision to expand its student intake. Lecture rooms are unexpectedly taken over by other classes, causing confusion for the students, and there’s little room to study at the crowded library, he said.

“The university is now a business, rather than a institute for research and the human intellect,” he said.

“Zimbabwe is supposed to be the jewel of Africa. But we’re really worried about how we’ll progress.”

Early signs from Zimbabwe’s new government have been unimpressive. The new cabinet, appointed last month, is dominated by many of the same politicians who ruled under Mr. Mugabe, along with the addition of several senior military men in key cabinet posts. It has shown little interest in reforming the education sector.

The new government’s first budget, unveiled in early December, largely perpetuated the status quo in the education sector. One of the few changes was a negative one. The government announced it was cancelling its plan to recruit nearly 6,000 teachers for early childhood education programs. The move would save $36-million in salaries, the government said.