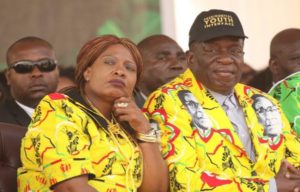 The warning was given by the party’s Mashonaland West Provincial chairperson and Justice Minister Ziyambi Ziyambi who said the first family was different from the Mugabes.

Ziyambi said there were some senior Zanu PF officials who were soliciting for favours from President Emmerson Mnangagwa’s wife Auxilia  during her personal functions.

“ If you have an assigned duty, you should do so instead of just rushing to the First Lady’s personal functions seeking favours as had been the norm under Mrs Mugabe,”Ziyambi told the state media .

“I know the First Lady personally; she is not an attention seeker like Mrs Mugabe who would bus people from Kariba to Domboshava.

“ I met the first lady while she was donating at Chikurubi Female Prison and she instructed me to go back and enjoy my holiday at home. I only managed to meet her after convincing her I was in Harare. She had also earlier on instructed me that people from my Ministry were not welcome as the trip was meant for her personal visit,” he said.