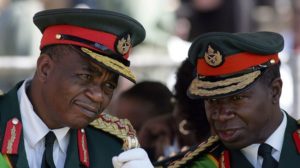 The party’s secretary for Security for who is also the former Home Affairs Minister Giles Mutsekwa, said that by redeploying the military generals, President Emmerson Mnangagwa has implemented security reforms.

The recent redeployments have seen:

– Commissioner-General of the Zimbabwe Republic Police Augustine Chihuri was also pushed into retirement and replaced by Deputy Commissioner Godwin Matanga, in the interim. Mutsekwa was quoted by the Daily News saying, “Transformation comes in different ways. Firstly, you can have it through retraining and re-orienting the security services. You can also have transformation by plucking out those that you can identify as more political than being military. Pluck them out of that field and put them where they want to belong. That also brings transformation.

“I see that as a reform of the security sector…As you are aware since we have been in existence as opposition our call has always been that we must transform the security services in Zimbabwe. In this scenario, Zimbabwe is experiencing transformation which the former president (Robert Mugabe) has been resisting but now if we look at our scenario you will find that most generals and senior officers have been moved from the military to take up posts in governance.”