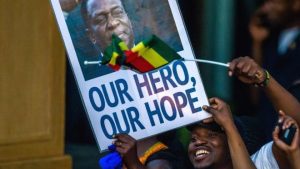 The party’s secretary for administration Obert Mpofu told the state media that people were being confused by the party’s regalia bearing Robert Mugabe’s inscriptions.

Mnangagwa took over power from Mugabe in November last year through the assistance of the military.

“We have set up a committee chaired by Cde Simon Khaya Moyo to deal with the issues to do with regalia,”Mpofu said.

“They have come up with various designs and these are the designs that we will meet to see tomorrow and then what ever is recommended will be taken to the Politburo.

“The previous regalia had the inscription of the former president who is no longer our president and we feel if that is allowed to continue it might confuse members during the elections. We want them to be familiar with the new dispensation led by President Mnangagwa. It is his picture that will appear in most of the documents leading to the elections,” he said.