Zanu PF Women’s League has made a ”non-negotiable” demand of 50 percent share of the ruling party’s political power. 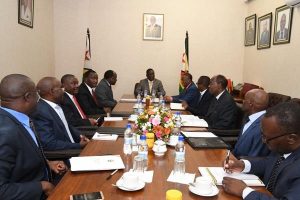 According to the ruling party’s central committee report presented to the 2017 special extraordinary congress, the women’s league said females still don’t have enough representation in leadership positions and that impacts how decisions are made.

“The disproportionate statistics of women in decision-making position in the party as well as public and private institutions continue to be a cause of concern
“This issue has been topical in the women’s league resolutions of the 15th and 16th national peoples conferences.

“It is the women’s league belief that buy-in to ensure 50/50 or at least a quota representation of women should start with the party itself.”

At the Zanu PF extraordinary congress in December last year, Mnangagwa ignored calls for the restoration requiring the election of a woman vice president that was first advanced by former first lady Grace Mugabe when she was the women’s league boss.

The quota system was supposed to be adopted at the last extra ordinary congress, which would have seen Grace replace Mnangagwa after Zanu PF provinces had already endorsed her.

The Central Committee report calls for the need to respect the country’s Constitution which promotes equality.

“Women continue to struggle for recognition and inclusion in all levels of decision-making in line with other endeavours that promote gender equality.

The women’s league aims to increase women participation and representation in politics and alllevels of decision-making in line with Constitutional provisions that promote equality and equity,” the report added.

Analysts said even the value of gender equality provided for in terms of section 3(g) of the Constitution had not been taken into account in terms of Cabinet appointments.
Women still lag behind in leadership posts despite that 2013 Constitution having several sections that promote gender parity.

Section 17(1) of the Constitution stipulates that it is mandatory for the State to promote gender parity.

The Proportional Representation quota under section 120(2)(a) of the Constitution provides for the election of senators under a party system of proportional representation, in which male and female candidates are listed alternatively, with females heading the list, while Section 124(1)(b) provides for seats to be reserved for women.

Human rights groups say although women make up 52 percent of Zimbabwe’s 13 million population, they are not represented meaningfully in positions of governance. For example, out of the 10 provincial governors in Zimbabwe, only three are women. Daily News