The Vigil has launched a new petition calling on President Mnangagwa’s government to account properly for Gukurahundi. 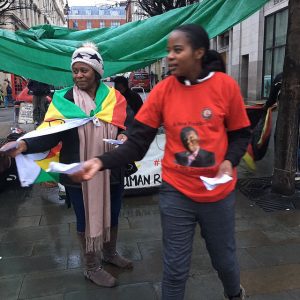 The petition reads: Zimbabwe has reportedly been encouraged by the UK Government to apply to rejoin the Commonwealth. Zimbabweans in exile in the UK, and supporters, urge the UK not to support readmission until the ruling Zanu PF satisfactorily addresses the genocide of some 20000 Ndebeles in the 1980s. A simple apology would be a start but we believe an independent truth and reconciliation process offers the best hope of healing the still bleeding wounds.

The Vigil believes the steps taken so far by the Zimbabwean government will not adequately address the genocide, during which children were made to watch their parents being burnt alive in their homes, their remains thrown down abandoned mineshafts. The truth needs to be made public and those involved must express contrition, with reparations made to those wronged.

The new petition, which will also be posted online, joins another one we are running that calls on the British government to withhold any support for the new regime until there are free and fair internationally monitored elections. The petition to UK Africa Minister Harriett Baldwin reads:Zimbabwean exiles and supporters welcome your visit to Zimbabwe and believe the UK has much to contribute to the country. The euphoria over the removal of the Mugabes has given way to realisation that nothing else has changed. The new leader Emmerson Mnangagwa spoke of democracy but also made clear his overriding allegiance to Zanu PF, which has repeatedly shown it does not believe in democracy. We urge you to insist on free and fair elections in Zimbabwe to determine the will of the people before the UK offers support to Mnangagwa. In particular, we stress the importance of the following: New voters’ roll and an independent election commission, Diaspora vote, Participation of Western election observers, Opposition access to state radio and television, Police reform and the disbanding of the Central Intelligence Organisation.

The British government appears to be enthusiastically embracing Mnangagwa’s government but reports suggest that other European Union countries are taking a more cautious approach, insisting on firm evidence that Zimbabwe is on the road to reform (see: https://www.theindependent.co.zw/2018/02/09/britain-eu-divided-zim-funding/).

The Vigil believes that Zimbabwe will be helped on this road by the elevation of Cyril Ramaphosa to the South African Presidency as soon as disgraced President Zuma can be dragged out of office. Reports quote a close ally of Ramaphosa as describing Zuma as a ‘monster’ who ‘does not care about his country, not even its people’ (see: https://city-press.news24.com/News/no-immunity-for-zuma-the-monster-but-ramaphosa-needs-to-avoid-bloodshed-20180208).