HARARE (Reuters) - A powerful orator from humble beginnings, Morgan Tsvangirai was arguably Zimbabwe’s most popular politician and came within a whisker of unseating Robert Mugabe only to be outmaneuvered and ultimately outlived by his long-time nemesis. 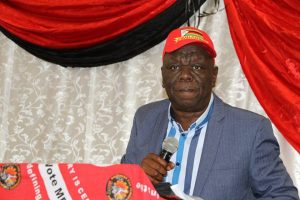 At the peak of his career, the self-taught son of a brick-layer served as prime minister to Mugabe’s president in a 2009-2013 unity government cobbled together after a disputed and violent election in which scores of his supporters were killed.

His presence helped stabilize an economy in freefall but Mugabe reneged on pledges to overhaul the former British colony’s partisan security forces and Tsvangirai was shunted back into his familiar role as opposition gadfly.

A hefty electoral defeat in 2013, blamed in part on Tsvangirai’s involvement in two sex scandals, put paid to his dreams of one day leading the southern African nation and three years later he revealed he was being treated for colon cancer.

He died on Wednesday aged 65, after 18 months of treatment in neighboring South Africa.

Despite their rivalry, 93-year-old Mugabe harbored grudging respect for an opponent who suffered multiple abuses at the hands of security forces, including a police beating in 2007 that left him with deep gashes in his head.

During their time in power together, the two men developed an uneasy working relationship, squabbling frequently but also taking afternoon tea every Monday and even joking about their frequent head-butting.

“I’ve got my fair share of criticisms and also dealt back rights and lefts and upper cuts. But that’s the game,” Mugabe said on the eve of the 2013 vote, mimicking the movements of a boxer.

“Although we boxed each other, it’s not as hostile as before. It’s all over now. We can shake hands.”

In the coalition’s early days, Tsvangirai even said he found Mugabe to be “very accommodative, very charming”.

As a young man, Tsvangirai worked in a rural mine to support his family – he had six children with his first wife, Susan – and cut his political teeth in the labor movement as a mine foreman.

In 1988, he became full-time secretary general of the Zimbabwe Congress of Trade Unions, which broke ranks under his leadership with Mugabe’s ZANU-PF party, a bold step less than a decade after independence.

Buoyed by his union successes, Tsvangirai helped found the labor-backed Movement for Democratic Change (MDC) in 1999 and quickly became Zimbabwe’s most visible opposition figure, harnessing the frustrations of urban workers bearing the brunt of a struggling economy.

In February 2000, the MDC engineered Mugabe’s first poll defeat – the rejection in a national referendum of a draft constitution that would have entrenched his presidential powers.

That June, the MDC endured killings and police intimidation to stun ZANU-PF by winning 57 of the 120 seats in parliament after Tsvangirai captivated the public with his combative and compelling pro-poor rhetoric.

As he would do on two other occasions, Tsvangirai claimed to have been cheated by a mixture of cunning and violence meted out by Mugabe, who ruled for 37 years until forced to step down after a de facto coup in November 2017.

In March 2008, he came closest to unseating Mugabe.

Still bearing the scars of his treatment by police – an outrage that bolstered his popularity – Tsvangirai beat Mugabe in a first round vote but was forced to pull out of a run-off due to a campaign of violence against his supporters.

His undoubted personal courage and political obduracy earned him plaudits in the West, with Australian Prime Minister Julia Gillard likening him in 2012 to pro-democracy figureheads such as South Africa’s Nelson Mandela or Myanmar’s Aung San Suu Kyi.

Those who knew him better described a headstrong man ill-equipped to take on a figure as entrenched and ruthless as Mugabe.

“Tsvangirai is a flawed figure, not readily open to advice, indecisive and with questionable judgment,” former U.S. ambassador Christopher Dell said in a diplomatic cable published by Wikileaks in 2009.

“He is an indispensable element for opposition success… but possibly an albatross around their necks once in power.”

Dell’s misgivings proved correct when, in 2013, voters failed to credit Tsvangirai with Zimbabwe’s economic turn-around under the coalition government and handed him his biggest electoral defeat.

Tsvangirai, whose colorful love life had been laid bare in Zimbabwe’s tabloids and the courts over the previous two years, dismissed the result as “monumental fraud”.

After the defeat, the MDC split for the second time in less than a decade as loyalists led by former finance minister Tendai Biti laid the blame squarely at his door. As age and illness crept up, Tsvangirai never had a chance to prove him wrong.