The political dynamics playing out in Zimbabwe took another intriguing twist on Tuesday when ex-president Robert Mugabe not only smoked a peace pipe with his former deputy, Joice Mujuru, but also promised to back her presidential bid, the Daily News can report. 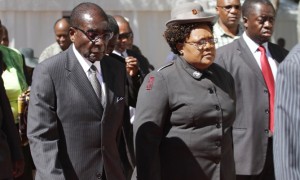 Mugabe met Mujuru at his ‘‘Blue Roof’’ mansion in the leafy suburb of Borrowdale, Harare, on Tuesday for the first time since they broke ranks in December 2014.

It was also the first time Mugabe has met an opposition party leader since the expiry of the unity government in June 2013 in which Zanu PF shared power with two MDC formations led by former prime minister Morgan Tsvangirai and Arthur Mutambara.

Insiders in Mujuru’s party — the National People’s Party (NPP) — told the Daily News yesterday that Mugabe, who initiated the meeting, offered his unqualified support to his former deputy in the forthcoming elections, where Zanu PF leader Emmerson Mnangagwa will be seeking his first full mandate as head of State and government.

Mnangagwa ascended to the throne through a soft military coup of November 14 that led to the forced resignation of his predecessor who had been isolated from his allies in the Generation 40 (G40) faction of Zanu PF.

NPP insiders said the meeting sent a clear message to Mugabe’s die-hard supporters that the 93-year-old ex-guerrilla leader was not for the “new dispensation” and was throwing his weight behind Mujuru.

They said Mugabe also sent a pointed but subtle message to his supporters to shift their allegiance to Mujuru, whose rivalry with Mnangagwa could be traced as far back as the 1990s when her husband Solomon Mujuru and Mnangagwa competed for Mugabe’s ear until his passing in a suspicious inferno in August 2011.

During the meeting, NPP insiders claimed the toppled president apologised for unfairly dismissing Mujuru in 2014, and blamed Mnangagwa for misleading him into believing that Mujuru wanted to topple him when in fact he was pursuing his own political agenda.

“They met and it was at Mugabe’s invitation. One of the reasons was to say sorry for everything that happened to her and that he had acted on incorrect briefings from Mnangagwa,” an NPP national executive member said.

The NPP official said Mujuru told Mugabe that despite all that she has gone through, she harboured no hard feelings towards him.

While Mujuru’s spokesperson Gift Nyandoro was not keen to disclose details of their meeting to the media, NPP’s deputy national organising secretary Paddington Japajapa told the Daily News that Mugabe had pledged his full support for Mujuru’s presidential campaign.

“The meeting took place at Mugabe’s residence so it is all systems go. G40 members are coming on board; former first lady Grace Mugabe loves the idea, and so is Saviour Kasukuwere and others who are also ready to help the Mujuru campaign financially,” Japajapa said.

“We do not care who they are and where they are coming from as long as they bring in votes — that is what we are excited about as a party. Let us see how it pans out but this is a real game-changer — I tell you.”

Although Mujuru was not immediately available for comment, she confirmed meeting Mugabe to Voice of America (VOA).

“I spoke to him on Tuesday. We discussed how he was lied to when they accused me,” she said.
“He is at his home; he is not happy with what happened to him which he said is not constitutional. He is surprised that the gun that we always knew as being led by politics is the one leading, why?” Mujuru told VOA.

“I also spoke to Grace, who also said she was misinformed by people who had realised that I was about to take over as president.”

“I was happy when he called me and I grabbed the opportunity,” she said.
She also claimed Mugabe’s wife, Grace, admitted during their meeting that she plotted her ouster from Zanu PF and government over petty gossip.

Mujuru said Grace now regrets having been ill-advised.
Mujuru revealed when she was ousted from Zanu PF, it had been alleged that her plan was to seize power and “reform Zanu PF the Magufuli way and we had already started so that is what they did not want,” she said.

Nicknamed “the Bulldozer” for his strict leadership style, Tanzanian president John Magufuli has won praise for his tough anti-corruption fight. Magufuli’s opponents, however, accuse him of cracking down on dissent and limiting democratic space.

He has denied the allegations, saying he was not a dictator. The drive to root out corruption in Tanzania has felled ministers, the head of government’s anti-graft body, the tax chief and thousands of civil servants.

Ironically, Mujuru was assaulted by suspected Zanu PF youths as she met her supporters in the capital on Thursday, less than 48 hours after her meeting with Mugabe.

The rumour mill has gone into overdrive, claiming Zanu PF was already running scared and that the attack was meant to intimidate Mujuru who has extended an olive branch to members of the G40 faction which was targeted by the military operation code-named Operation Restore Legacy.
One of the think-tanks in the G40 faction took to Twitter yesterday to hint that Mujuru and Mugabe’s meeting was “a game changer.”

“He was brutal when he sacked her four years ago and this would have been their first meeting since then – united in the cold. Could this signal a renewed alliance between Joice and the man she calls ‘father’?” Magaisa wrote on his Twitter account.

Magaisa noted that the alliance, if it materialises, could spell doom for Mnangagwa’s presidential bid.
He said Mugabe still commands a significant following in the country hence the alliance could work in Mujuru’s favour.

“For all his faults, and despite the fake cheers at rallies, Mugabe surely had people who idolised him? In 1980, Muzorewa’s supporters went underground but he had managed 220 000 votes at the election. Could there be Mugabe supporters out there who will back whoever he backs?

“If so, this front could prove to be a headache for Mnangagwa and his team. But would Mujuru forgive her treatment in 2014 at the hands of Mugabe’s wife, Grace and her cabal? Then again, there are no permanent friends or enemies in politics.

“This election could prove to be more fascinating and interesting than the damp squib it was threatening to be. It could turn out to be Zanu A v Zanu B v MDC United v Others!”
Mugabe expelled Mujuru from Zanu PF and government in December 2014 on untested allegations of plotting to unseat him.

Mujuru (62) had deputised Mugabe for 10 years, having joined his government at independence in 1980 as the youngest Cabinet minister.

After several months of pondering about her future, Mujuru caused a major political ripple when she emerged from her shell in March 2016 to head the Zimbabwe People First (ZPF).

She dumped ZPF months later after it got enmeshed in power struggles and formed NPP, whose campaign for the forthcoming poll is based on the promise to revive the economy and repair strained relations with the West.

Mujuru will stand at the polls as NPP’s presidential candidate. It, however, still remains to be seen if the meeting of minds between them could derail a resurgent Mnangagwa whose political stock is rising daily on the back of his strong push to revive the country’s economy and reintegrate Zimbabwe among the community of nations. Daily News