Cape Town – Eight Zimbabwean children, aged between two and 12, have been held by the Department of Social Development for three months without their parents. 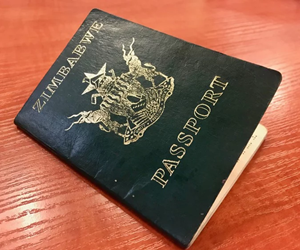 Delays in getting Zimbabwean passports and their cost are frustrating legal immigration. (Photo: Brent Meersman)

The children were taken into custody after a truck stopped by the roadside at Rustenberg on November 12, 2017, according to a GroundUpreport.

One parent said the driver told her that one of the youngest children was heard crying by passers-by. People in the parking area opened the truck to find the children and some adults being smuggled into the country.

A crowd gathered before the truck driver returned with food for the children. There was an altercation and the police were called.

The children were travelling to Cape Town to be with their parents. They are from eight families. One of the mothers is a minor herself.

The two truck drivers accompanying the children were arrested for trafficking in persons and contravening the Immigration Act.

The parents say the children are being held at a facility in Brits. A spokesperson for the Department of Social Development would not confirm this.

One mother told GroundUp they are no longer even allowed to speak to their children.

Her last contact was via the cellphone of a social worker on January 7.

During that call, her child was sobbing on the phone.

“We are mixed with scary children,” her child said.

“One of the children hit me saying, you kwere kwere (derogatory slang for foreigners) are finishing our food. Go back to your country.”

Her child said they all had to sleep in one big room and the food they were given was inedible.

“We have tried everything in our power to have our children back. I trusted the Malaicha (the truck driver). He always brings in children with no hassles. Lately, it has become costly and difficult to obtain a Zimbabwean passport [for the children], that is why I took a shortcut.

“My daughter passed her Grade 7 with distinction. I wanted to put her in the best school I could find here in South Africa, but now everything is ruined,” said the mother.

She said in the week following the arrest, all the parents travelled to Rustenburg where they met a social worker, police and a Zimbabwean embassy official from Pretoria.

The Zimbabwean embassy issued travelling documents for the children and said they would have to be repatriated and this would take two weeks. The parents returned to Cape Town.

Three months later, the children are still in the custody of the Department of Social Development.

An official of the Zimbabwean Embassy in Pretoria told GroundUp the embassy had done its part by issuing travelling documents to the children.

The breakdown appears to be between the South African departments of social development and home affairs and the Zimbabwean Department of Social Services.

Captain Tlangelani Rikhotso, a spokesperson for the Hawks North West province, said their jurisdiction was limited to the criminal investigation.

“It is the Department of Social Development’s duty to place children in a place of safety and ensure that the children are reunited with their families.”

Rikhotso said: “The case is still under investigation. The two truck drivers made a first appearance on November 14, 2017 at Rustenburg Magistrate’s Court and were released on R2 000 bail [each].”

Lumka Oliphant, spokesperson for the Department of Social Development, said it had “an international obligation to keep all the children found in South Africa safe. When the department got involved in the matter, they found out that the children were distressed, they are minors, unaccompanied and without support.”

“The parents were negligent. They broke the law, contravened immigration law, hence are deemed unfit to be given the children.

“The minors can only be released to the Zimbabwean government, but only if the government is able to give a guarantee that the children will be safe and protected when repatriated.”

She said the department had written to the Zimbabwean Department of Social Services, “but there was no response”.