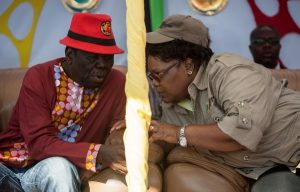 “Be ready, be excited, we are joining the MDC Alliance,” she announced on her Facebook social networking page Wednesday.

MDC Alliance is a grouping of opposition forces committed to bringing to an end Zanu PF’s 38 year old grip on power.

Mujuru said her decision to join the MDC Alliance was in honour of the late MDC leader Morgan Tsvangirai’s commitment to the struggle for democracy.

Addressing mourners gathered to bid farewell to Tsvangirai, Mujuru, who heads People’s Rainbow Coalition, another grouping of opposition parties set to challenge Mnangagwa and Zanu PF, said: “We acknowledge the war that you fought Mr Tsvangirai and I have accepted that we should work together to fulfil your dream.

“As opposition parties, we will honour your pledge.”

Tsvangirai, who succumbed to cancer last week Wednesday, had in the past unsuccessfully tried to get Mujuru to join the MDC Alliance.

Her argument was that the amalgamation of opposition parties must not use the name of one political party, in particular MDC.

In Buhera, while addressing mourners, MDC-T interim president Nelson Chamisa prodded Mujuru to join hands with other opposition parties, as they work on forming a formidable movement to challenge Zanu PF at the polls later this year.