Zimbabwe's new opposition leader Nelson Chamisa is 40 years old and he intends to run against President Mnangagwa on a youth ticket. DW's Privilege Musvanhiri asked him how he plans to lead the party. 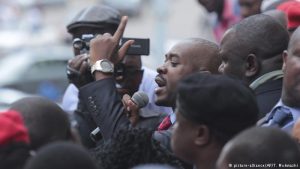 “Time is up for a particular generation,” says the leader of Zimbabwe’s biggest opposition party, Movement for Democratic Change (MDC-T). After the party’s founding father, Zimbabwe’s longtime opposition leader, Morgan Tsvangirai, died at the age of 65, the 40-year-old Nelson Chamisa is taking over the helm. Although his election as party leader was contestedby parts of the opposition, he was endorsed and announced his intention to run against President Emmerson Mnangagwa, who himself only came to power after the ousting of Robert Mugabe in November 2017.

DW: You are taking over from a larger-than-life figure in the late Morgan Tsvangirai. How do you feel fitting into his shoes?

Nelson Chamisa: It’s a huge responsibility. But it’s also an honor and a privilege to be able to serve in that capacity. I thank the people of Zimbabwe and the party, the Movement for Democratic Change, for bestowing that kind of honor [upon me.] I am fairly young, but I’m not new. I’m not an amateur in this game, I’ve been around for close to 18 years now. I started politics when I was a student leader, so I’ve risen through the ranks to occupy different positions but I’ve also been mentored by the great giant our icon Morgan Tsvangirai. So yes it’s a huge challenge, but you know, to whom much is given, much is expected. I know the expectation is huge. There’s a generational mandate and expectation and there’s a generational consensus that our young people must be able to step forward and we are raising our hands to be counted.

You will be pitting yourself at 40 against a 75-year-old, Emmerson Mnangagwa. How do you see yourself faring in that election come election-day?

Mr Mnangagwa will definitely be defeated in this election, partly because he does not have the energy to be able to match the zeal and enthusiasm we have as young people, but also because he’s done a good job. He’s a liberation icon – it’s good for him to rest and not to be abused by our generation. We must now take up the challenge and move forward. This is a generational transfer of power, so we are shifting responsibility and authority from the older generation to the newer generation so that we punctuate and amplify the gains of the liberation struggle so that we are able to entrench our sovereignty as a people. But we are also able to entrench some of the gains of the liberation struggle – issues around land, issues around our ability to self-determine, issues around economic transformation, issues around creating opportunity and prosperity for our generation, empowerment of young people, those are the issues we’re going to be focusing on.

You said that this issues are going to be about generations and ideas. There are a lot of young people who are putting hope in you. Why should they believe you in terms of reviving that hope to say that they have a future?

The future is very young and inclusive. Young people want to be involved. It’s clear that I understand their level of interaction, their frequency of issue, of ideas, of interests – we belong to the same category. But more importantly, we have answers in terms of governance. Young people must be able to be involved, included, participating at the executive [level,] in parliament, in local authorities as councilors so that they make decisions. Young people should not just be takers of decisions, but givers of decisions – they have to decide, rather than be decided for or around. They have to be at the center of decision-making. Young people have to be given opportunities to be in the mainstream. Young people must be key-players in terms of the economy, but more importantly, we also want to see young people quite active in issues of technology. I spoke about making sure that we have local software development, engineering, creating hubs of technology within the country, leveraging on our educational profit, because we have a lot of young people who are educated, so we need to build on that. We also need to make sure that in terms of going forward, the social interventions, issues around HIV, issues around abuse of drugs, young people need to be trained and absorbed, so that we are building a young citizen, that we are building a young population that is able to provide leadership not just to the country, but to the continent and the world. Because we need a complete citizen, so yes, there’s a reason that young people must celebrate because if one of their own is on the dance floor, they can enjoy the music. Morgan Tsvangira founded the Movement for Democratic Change in 1999

What kinds of thinking do you want to see going across Africa in terms of generational changes and passing on leadership renewal?

It’s time up for a particular generation. This is the message to our liberation icon, Mr Mnangagwa just like Mr Mugabe. It’s time for them to be warehoused and archived for national use as father figures, not for them to be runners or laborers of the nation at a time when we’re supposed to take up our responsibility. The liberation struggle was fought and waged by young people because it was their historical mandate. Now our historical mandate is transformation and this is where we must step in to take up that responsibility. More importantly, as we go forward, you have seen the politics of South Africa, young people are beginning to weigh in. [The same goes for] Nambia and Zambia. We have seen young people becoming members of parliament, councilors, taking key positions in business, entrepreneurship and various facets of life. It’s young people who are the movers and shakers. So we want to also see that in politics. We want our continent to be painted young. We want our continent to have a young voice – very audible and very logical in articulating the future of this continent, in terms of uniting and modernizing the continent. You know, the vision 2063 of the African Union has to be articulate. You can’t have that vision being driven by people who are not going to be part of that future. They are not motivated, they have no energy. They’re in their 60s, 70s. They know that they’re in the sunset of their time. They can’t build this great continent and they can’t see that future. In fact it’s actually criminal for people like Emmerson Mnangagwa in their 70s on the African continent to be talking about the future in the 2050s and 2060s.

Right now we have 43.5 percent of young people between the ages of 18 to 35 who have registered to vote in Zimbabwe. This generation is sometimes accused of choosing to stay away or letting the older generation decided for them. What would you say to this generation, which you are a part of, in terms of pushing and seeing things happening for themselves?

Young people have not been participating in the past. I think it was a very miniscule percentage of people being active in politics. But for the first time, we are beginning to see and upsurge in the numbers. It also tells you about the restlessness of young people and their enthusiasm to shape their future because they have seen that all the options have been squandered by other generations.

Nelson Chamisa is the leader of Zimbabwe’s biggest opposition party, the Movement for Democratic Change (MDC-T). He took over leadership form its founder Morgan Tsvangirai on February 15, 2018. He served as Minister for Information Communication Technology from 2009 to 2013 as a part of the coalition government.