Deposed despot Robert Mugabe left Zimbabweans fearing a possible return after he was pictured posing with the current leader of the opposition this week.

The photo sent shockwaves through the ruling ZANU-PF party which he dominated for decades as he was shown with opposition leader Ambrose Mutinhiri.

Mutinhiri recently became the leader of the brand new National Patriotic Front (NPF) party which hopes to unseat the government in polls expected by August.

The NPF is made up of a pack of pro-Mugabe politicians who broke off from the incumbent ZANU-PF party back in November after the tyrant stood down.

Mutinhiri’s only became leader of the NPF last week after an abrupt resignation from ZANU-PF.

The announcement that he would be the presidential candidate of the new party came as a shock to many and exposed deep divisions in the governing party. 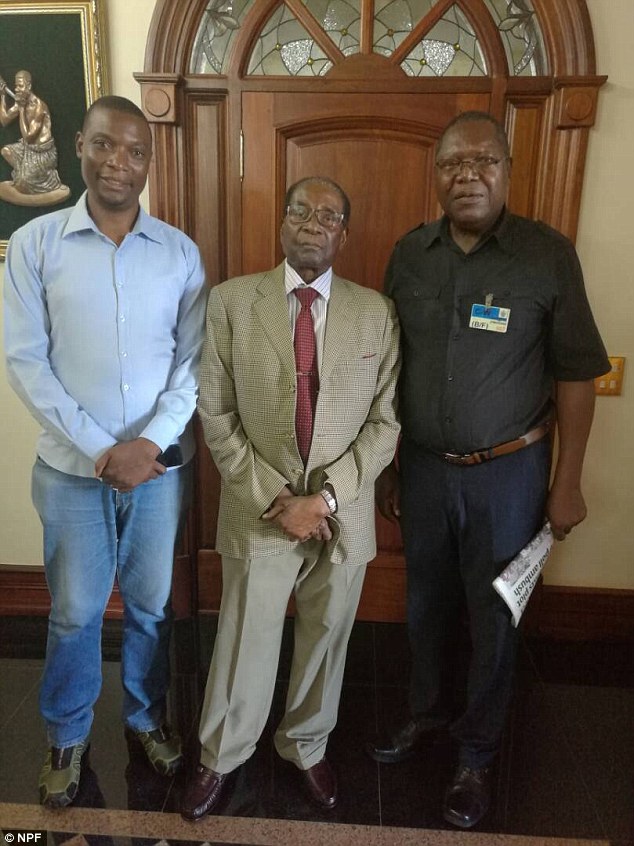 The symbolism of the photo opportunity, which was featured at the top of a press release issued by the new pro-Mugabe splinter party, was unmistakable.

‘There is an issue regarding the former president,’ he said.

‘Currently we see in the media various speculations about his activities… we are not happy with what the media is saying. We don’t know whether it’s correct or not but it is an issue we are examining.’

(The photo) sort of solidifies the whole idea that the Mugabe family is behind the project,’ said Gideon Chitanga, an analyst with the Johannesburg-based regional think-tank Political Economy Southern Africa, describing Mugabe’s meeting with Mutinhiri as ‘very cordial’.

Other analysts said that Mnangagwa had every reason to be concerned by Mugabe’s sudden re-emergence on the political scene.

‘There is an understated panic — especially within ZANU-PF,’ said Zimbabwean political analyst Brian Kagoro who added that the ruling party had already struggled to formulate a response to the opposition following the death of its figurehead Morgan Tsvangirai in February. 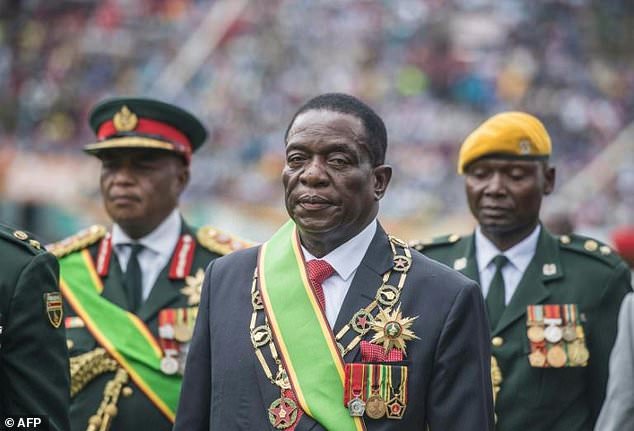 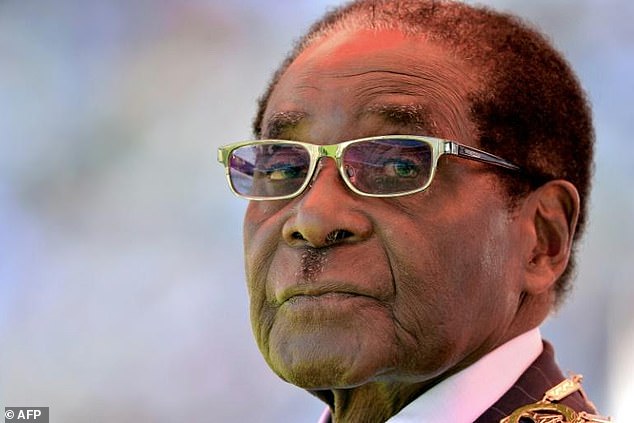 ‘It would have been a much easier task to concentrate on infiltrating the (opposition) but now they have to deal with uncertainty as to who is with them,’ said Brian Kagoro, a director of the UHAI Africa think-tank.

Mugabe was forced to quit when the military briefly took power in November and ZANU-PF lawmakers launched impeachment proceedings against their once beloved leader. Since his dramatic reversal of fortune, he has largely appeared to stay out of public life.

The military moved against Mugabe, 94, after he sacked his then-deputy and heir-apparent Mnangwga apparently fearing the nonagenarian was grooming his wife Grace to succeed him as president.

The former first lady had cultivated her own factional support base within ZANU-PF known as ‘G-40’ that was seen as hostile to the security establishment.

‘There is a fight for legitimacy among the retired military supremos,’ said Kagoro, who suggested that Mugabe was behaving with ‘grand malice’ over his treatment.

The NPF claims to have many members ‘who are outraged by the unconstitutional and humiliating manner in which president Mugabe was criminally ousted from the leadership of both ZANU-PF and the country’.

Robert Mugabe was ousted in November 2017 after a 30 year career as President of Zimbabwe.

Mugabe was instrumental in founding the Republic of Zimbabwe – but became known for his brutal policy and corrupt leadership.

His rule proved to be one of the most controversial of any world leader in the 20th or 21st century.

At 94 years of age when he was eventually replaced by a military coup he was by far the world’s oldest active national leader.

He was deposed by a military uprising but refused to resign from office for several days afterwards – prompting days of protests across Zimbabwe.

Eventually he was persuaded to resign and he was replaced in his position as President and leder of Zimbabwe’s ruling Zanu-PF party by Emmerson Mnangagwa – known as ‘the crocodile’.

Despite the NPF’s emergence and the ensuing trepidation at the top of ZANU-PF, the pretender party is unlikely to make significant inroads at the polls.

‘They are trying to create the impression that Mugabe has a lot of residual support,’ said Derek Matyszak, a independent Zimbabwean political analyst. ‘But I don’t think they are going anywhere.

‘And though he is unaccustomed to not exercising his bit of power, I can’t see him going full on into the political field because he is dependent on Mnangagwa to have a comfortable retirement.’

Mutinhiri himself is seen as a marginal figure without an established regional or ethnic base that would be essential to dent ZANU-PF’s monolithic grip on power.

Chitanga, the analyst, said it was unfortunate that Mugabe appeared to be ‘getting entangled in opposition politics.’

‘The normal thing would have been for him to retire quietly,’ he said.

The NPF has quoted Mugabe as saying that ‘people are free to belong to parties of their choice’.

It also vowed to ensure ‘there is no interference by the army, or those that would want to resort to violence as a means of getting votes’.

It is an irony that will not be lost on voters that elections held under Mugabe were marred by violence and voter intimidation – alongside allegations of electoral fraud.