Yesterday was one of the most shocking days in Zimbabwe's political history, as the police finally announced that they would institute investigations into the whereabouts of political activist Itai Dzamara - who was abducted three years ago. 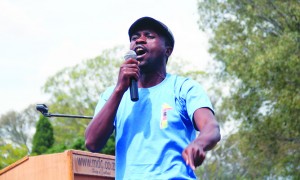 He was, however, abducted near his home in March 2015, when he was leaving a barber shop – never to be seen or heard from again.

As much as his family’s, and civil society organizations’, concerted calls for his whereabouts to be ascertained by the police, nothing was forthcoming, as it was clear that the state security apparatus was not at all keen to investigate the matter.

The Dzamaras even had to approach the courts to compel the police to investigate his abduction – a plea that was duly granted – but, was, again, conveniently ignored by the country’s security sector.

According to a recent private radio interview with Patson Dzamara – the activist’s older brother – the family last heard anything from the police more than a year ago.

All this hide and seek by Zimbabwe’s state security agents says a lot about the activist’s abduction.

Without any thorough investigation, this can never be conclusively ascertained, but all the circumstantial evidence point to the involvement of the country’s state security agents and the military.

Let us rewind for a bit.

There was a time when Patson alleged that he had been given a picture that was, ostensibly, of his brother – bound up and head enclosed in a covering.

Patson said that he had been given the picture – which he showed the nation – by state security agents sympathetic with the family, who told him that Itai was abducted by the state security branch of the military.

Who would doubt that?

The country’s military is notorious for its overzealousness and unreasonable hatred for anyone or anything that smacks of being anti-regime.

They have had an ineviable history of brazen brutality against real and perceived ‘enemies of the state’, even peaceful protesters, who would have been merely exercising their democratic rights – as was Itai doing.

This state machinery has been the backbone of the brutal Mugabe regime, and now have bestowed their blind and fanatical allegiance to new president Emmerson Dambudzo Mnangagwa – after turning their backs on the former president in a military coup d’etat last November.

Those are the people the nation has been dealing with – they can kill for you today, but may kill you tomorrow!

So, why has the police decided to commence the long-overdue investigation, especially when it is quite clear that the military, which is in full charge of the country, is the one responsible for his disappearance?

The answer is quite simple and straightforward…this is just another smokescreen by the Mnangagwa regime to further hoodwink the world, as this military junta continues to portray itself as a ‘new dispensation’, that is democratic and peaceful.

However, this is a pointless and futile exercise, as the world can now see through the original shenanigans.

The police will never be able to seriously investigate anything, as the military would never allow this – any officer who tries to act heroic would meet a fate worse than Itai’s.

The fact that the police never bothered investigating this case for three years shows that there was a very powerful force behind this abduction…and in Zimbabwe there is only one force more powerful even than the president – the military.

If any answers on Itai’s abduction are to be forthcoming, then military generals, such as Constatino Chiwenga (now vice president), Perence Shiri (now minister of lands and agriculture), and others would need to be vigorously interrogated.

Obviously, this would never happen in this Zimbabwe!

This is clear from the fact that these same generals have massacred tens of thousands of Zimbabweans with impunity ever since independence in 1980, and have never been questioned even for a minute.

So, as far as they are concerned, Itai is not worth the breath!

This should never be allowed to continue, as both the people of Zimbabwe, and the international community should no longer treat these gangsters with kid gloves.

This is the time to raise up, and show them that, as much as they have guns, we are no longer afraid of them, and they can shoot us all they want, but we will no longer cower.

The people of Egypt and Tunisia, and to a lesser extent, Iran, stood bravely in the face of gun-weilding state security bullies.

The people of Zimbabwe are now sick and tired of living in fear, and time has come to force off the shackles of oppression – we refuse to be bullied anymore.

These military gangsters move around as if they own this country and its people – even worse than Mugabe ever did – but, now this should all end.

This is Zimbabwe, and its for all Zimbabweans – not just for the military and whomever they ordain to lead at that time.

° Kudakwashe Sheddy Marangwanda is a UK based Zimbabwean activist.