HIGH Court Judge Justice Amy Tsanga will on Thursday 26 April 2018 preside over the hearing and determination of an urgent chamber application filed by Zimbabwe Nurses Association seeking an order to restrain and interdict the Health Services Board (HSB), Health and Child Care Minister Hon. David Parirenyatwa and Vice-President Hon. Constantino Chiwenga from terminating the services of some striking nurses and to stop the government from recruiting new staff. 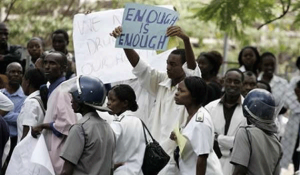 Zimbabwe Nurses Association filed an urgent chamber application in the High Court on Friday 20 April
2018 seeking an order to stop the HSB, Hon. Parirenyatwa and Vice-President Chiwenga from
terminating the services of nurses and to declare the termination of their employment contracts as null
and void and be stopped from filling their positions.

In the urgent chamber application, Zimbabwe Nurses Association argued that the purported summary
dismissal of some striking nurses was not justified, as the conduct of the nurses was legal as they were exercising their labour rights.

Zimbabwe Nurses Association, which is represented by Precious Chakasikwa and Bernard Chidziva
of Kantor and Immerman Legal Practitioners, argued that there is no justification by anyone to
terminate the nurses’ contracts of employment as they had embarked on a lawful collective job action.
Zimbabwe Nurses Association wants the High Court to restrain and interdict the HSB, Hon.
Parirenyatwa and Vice-President Chiwenga from terminating the services of nurses at state-run
hospitals and in the event that the respondents proceed with the termination of the employment
contracts, the termination be declared null and void.

In addition, Zimbabwe Nurses Association wants the respondents to be barred from filling their
employment positions.