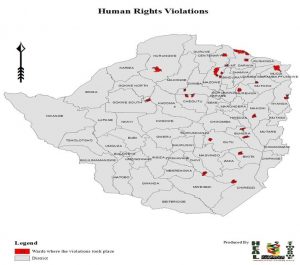 Heal Zimbabwe observed that intimidation continuously topped the list of violations every week. In this report, intimidation recorded the highest number of cases with 29 cases. The cases of intimidation increased by 09 cases from the previous report which recorded 20 cases.  Perpetrators continuously use intimidation as a tool to harness power and support for the ruling ZANU PF party ahead of the elections. Victims are repeatedly threatened with past violence, withdrawal of food aid and developmental benefits. Such threats lead to fearful communities who are not able to exercise their constitutionally provided rights. Section 67 of the constitution provides for citizens to participate in political activities of their choice and freely participate in elections without fear or victimisation. HZT in this regard perceive intimidation as a threat towards peace and social cohesion especially towards elections.

2. Distribution of Violations by District.

The chart above reveals the districts in which human rights violations were recorded. The violations were recorded from a total of 17 districts that are Chiredzi, Bikita, Gutu, Chivi, Mutoko, Murehwa, Nyanga, Makoni, Buhera, Kadoma, Chegutu, Mazowe, Mt Darwin, Muzarabani, Hurungwe, Zvimba and Gokwe South. Mazowe and Mt Darwin recorded the highest number of human rights cases with 7 and 6 cases respectively. The remaining districts recorded cases ranging from one to two. In this report, a total of 31 cases were recorded compared to 24 cases recorded in the previous report. Heal Zimbabwe observed that there is an increase of human rights violations as the nation approaches the 2018 elections.

ZANU PF leadership recorded the highest number of perpetrators with 56.5% (26 out of 46), largely ward chairpersons, and ordinary party members. Traditional leaders were second with 33% (15 perpetrators) followed by Councillors which recorded 7% (3 perpetrators). War veterans and soldiers recorded the least with 2% each (1 perpetrator). Victims varied from ordinary community members, opposition supporters and human right defenders.

5. Our Interventions on Human Rights Violations.

Heal Zimbabwe’s objective is to facilitate community led processes in resolving and managing conflicts. HZT embraces the use of bottom up approaches to conflict which entails affording local level response systems to respond swiftly to cases of human rights violations.

In Chiredzi West ward 30, Heal Zimbabwe engaged Joe Gasva on the need to desist from forcing community members to submit serial numbers of voter registration slips. Gasva however pointed that he had been instructed to carry out the exercise by a man he only identified as Kennel Chiseva. The organisation also instructed affected persons to report the case at their nearest police station.

In Mazowe ward 7, Heal Zimbabwe engaged Councillor Demberere who was forcing community members to submit serial numbers. Although Councillor admitted that it was indeed a criminal offence to collect a serial number of voter registration slips, he however pointed that he had received directives from the ZANU PF Provincial leadership. Heal Zimbabwe then made a follow up and contacted Mazowe Central Constituency Legislator, Tabetha Kanengoni Malinga, who condemned such a practice and highlighted that it was indeed a criminal offence for one to collect serial numbers. Legislator Malinga also promised to look into the matter.

Through the work of various HZT community led peace structures such as early warning and early response committees and human rights monitors, the organisation has managed to provide swift rapid response services to cases of human rights violations. The institution also engaged other implicated Village heads and ZANU PF structures in areas such as Mt Darwin, Mazowe, Buhera, Nyanga, Chiredzi, Chivi and Hurungwe. Generally, the Village heads highlighted that most of the directives came from the local ZANU PF leadership within their areas. Heal Zimbabwe implored the Village heads to uphold their constitutional duty of not violating fundamental human rights and freedoms of any person as enshrined in Section 281 of the constitution. HZT has also facilitated for affected community members to report their cases to the Zimbabwe Human Rights Commission (ZHRC).

Heal Zimbabwe through its National Peace campaign will continue to campaign aggressively on the need for citizens to uphold peace before, during and after the 2018 elections. The organisation has sent all cases to the ZEC and ZHRC for redress. The organization will continue to monitor human rights violations in political hotspots areas.

On the 25th of March 2018, Village heads Katarira and Kamedzero forced people to submit serial numbers of voter registration slips. The two warned that those who fail to comply will be struck off the food aid beneficiaries list. The Village heads also announced that they were going to submit the serial numbers at the ZANU PF Mt Darwin district offices.

ZANU PF District Chairperson, Robert Dust Chinokuya on the 25th of March 2018 intimidated community members during a ZANU PF restructuring meeting conducted at Mukumbura Primary School. Chinokuya highlighted that people who did not submit serial numbers will be heavily beaten since the BVR kits will assist the ZANU PF party to help them detect political parties that people will vote for.

On 31 March 2018, ZANU PF District chairperson, Oswald Chinyanga disrupted a soccer tournament organized by Respect Chawukura, an aspiring MDC candidate. On the day in question, Chinyanga ordered Village heads who had attended to disperse youths highlighting that the tournament was an MDC Alliance function.

On 29 March 2018, ZANU PF members, Mark Kanengoni and Obert Karuja conducted a meeting at Chibuwe ward centre and announced that ZANU PF was going to unleash violence if opposition party, MDC Alliance wins the elections. The two also announced that soldiers have since been deployed in the ward to detect people who support opposition parties.

On 01 April 2018, Councillor Naison Demberere moved around the ward forcing people to submit serial numbers of voter registration slips. Demberere also announced that people who fail to submit the serial numbers, would be struck off the Ministry of Social welfare food aid beneficiaries list.

Nicodemus Mudenha a ZANU PF youth on the 25th of March 2018 forced community members to attend a ZANU PF meeting at Progmore farm in Mazowe. Mudenha highlighted that people who fail to attend the meeting will be heavily beaten in the upcoming elections.

On 27 March 2018, ZANU PF ward chairperson, Nicholas Fifteen intimidated community members during a ZANU PF meeting conducted in Chinemudzimu village. Mr Fifteen highlighted that anyone who refuse to submit their serial numbers will be labelled a “sell-out” and heavily beaten in the upcoming elections.

Village head Munhuwaro Chiunda on the 28th of March 2018 intimidated community members during a community meeting conducted in Chiruwa village. Village head Chiunda highlighted that people who failed to submit their registration slips will be denied food aid and heavily assaulted by soldiers.

On 26 March 2018, Village head Sinclair Chironga intimidated community members in Mandaza village. He highlighted that he is in the process of compiling names of opposition supporters who attended the MDC alliance rally at Nzvimbo Business Centre in Chiweshe and that he will submit the list to the ZANU PF leadership in Mazowe.

A ZANU PF supporter only identified as Simbarashe Bhobho on the 25th of March 2018 intimidated community members at Nzvimbo Growth Point. Bhobho announced that he compiled names of MDC supporters who attended the MDC alliance rally which was conducted in Chiweshe and highlighted that he was going to submit the names to the ZANU PF leadership in the ward.

On 27 March 2018, ZANU PF Chairperson Hazvinei Makota threatened an MDC Alliance member with violence accusing her of secretly mobilising supporters for opposition political parties in the area. Makota also announced that ZANU PF was going to unleash violence if it loses the 2018 elections.

Rebecca Chimonyo, a ZANU PF member on 31 March 2018 moved around the ward forcing people to submit serial numbers of voter registration slips. Chimonyo also announced that those who would refuse to comply would be denied food aid.

On 04 April 2018, Councillor Garikai Marowa distributed maize from the Ministry of Social Welfare at Munyanyi business centre. Marowa announced that he was only distributing the maize to ZANU PF supporters only and further highlighted that opposition party members were not going to receive the maize since they will not vote for ZANU PF.

On 24 March 2018, Village head Masamba Magadu threatened people who wanted to attend an MDC Alliance meeting at Kute Primary school. He announced that he would compile a list of anyone who attends the meeting and submit it to soldiers. The opposition supporters had to cancel the meeting fearing for their lives.

On 23 March 2016, Councillor Bhema conducted a meeting at Nyashanu ward centre and warned people that if they vote for opposition party, MDC Alliance, they risk being assaulted by soldiers.

ZANU PF members, Joel Gasva and Average Vangi forced people to submit serial numbers of voter registration slips. On 28 March the two moved around the ward threatening people with violence if they fail to voluntarily submit serial numbers of their voter registration slips. The two also warned people that if opposition party, MDC Alliance wins the general elections, soldiers were going to unleash violence worse than that of 2008.

On the 27th of March 2018, Kernel Masomere, a ZANU PF member, who is eying for a parliamentary seat in Ngundu moved around the ward threatening people with violence if he loses the Parliamentary seat. On the same day, his campaign team led by Headman Madzivire and Chief Shindi also announced that they will deny food aid to people who fail to vote for Masomere.

Village head Marara on the 25th of March 2018, intimidated community members during a meeting conducted in Marara village. He highlighted that everyone in the area should vote for the ruling ZANU PF or risk being beaten by soldiers in the upcoming elections.

ZANU PF branch treasury Evelyn Dera and ZANU PF member, Tafirenyika Kavhukatema on the 26th of March 2018 intimidated community members during a ZANU PF meeting conducted at Manhemba Primary School. Dera and Kavhukatema announced that community members were going to vote in groups with their respective Village heads in the 2018 national elections. Dera further highlighted that people will be beaten in the area if ZANU PF loses the election.

ZANU PF members, Gibson Murumbi and Locadia Mashava intimidated community members on the 26th of March 2018 in Bosha village. They moved around the ward highlighting that all the people who fail to submit serial numbers will be heavily beaten in the upcoming elections.

Village head Nduna Ngidhi on the 28th of March 2018 intimidated opposition supporters in Aroni village. He highlighted during a community meeting that he was not going to allow opposition party, MDC Alliance to conduct rallies in his village. He also warned that community members who organise rallies for MDC Alliance, will be assaulted by soldiers.