ZIMBABWE experienced about two and half decades of wasted business opportunities as former President Robert Mugabe and his wife Grace ran amok by bombarding the world with hate speeches instead of facilitating the country's economic growth, the Special Advisor to the President Chris Mutsvangwa has said. 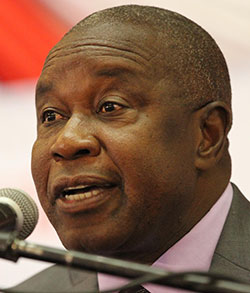 Speaking as the guest of honour at the official launching of the Invest in Manicaland Province magazine at a local hotel in Mutare yesterday, Mutsvangwa said Mugabe and Grace with the help of G40 members closed the doors for potential investment opportunities in the country.

“There were no any business prospects to talk about in the country. We had people like (Ignatius) Chombo (Former Minister of Local Government)  who was in the local government for many years and he even failed to build a single sky scraper in the country. We had such ministers who did not have an idea of what development is,” he said. “After that we had others like (Saviour) Kasukuwere (Former Minister of Local Government) with big frame but small brains. How could he built small shacks and later on dismantle the shacks saying they were built on undesignated areas. No no no we could not develop as a nation,” Mutsvangwa said. “We thought that must come to an end. That is why us, as the militant generation had to intervene because we wanted prosperity as a nation.

The events of November 2017 speak for themselves. The world might think that it was a miracle but we were watching and we had all the organizational capacity. We knew what we were doing and how to intervene. And we all know the results,” explained Mutsvangwa.

He said the new dispensation had brought new opportunities in Zimbabwe and hailed Manicaland province for coming up with the annual magazine whose aim is to create awareness among local and international investors of the opportunities offered in Manicaland province. “I want to salute the people who worked very hard in coming up with this publication.  I am happy to say that President ED Mnangagwa has taken up this initiative and has taken the mantra even to a higher levels and it will be Zimbabwe’s provinces are open for business,” he added.

He said the Mugabe’s government did not give opportunities to potential investors but the government officials whom he said were close G40 members were stifling economic growth through selfishness and corruption.

“We had many investors but they faced hindrances in some government operational systems with the G40 members twisting processes in their favour at the expense of the nation. But now we have President Mnangagwa who has encouraged all sectors in Zimbabwe to open up. He has repealed some acts that were not appealing to investors. We have since established various legislations to suit both parties,” he said giving reference to the Joint Venture Act that he said took long processes to make deals. “We will have a one stop shop in Harare where potential investment deals will be negotiated and signed in hours and not years as what has been happening during the Mugabe era,” Mutsvangwa said.

” Manicaland is a province richly blessed with both human capital and natural resources which, when their potential is fully unlocked, van contribute significantly to GDP, while creating thousands of much needed jobs and sustainable incomes,” he said. “The primary aim of the magazine is to position Manicaland as the prime investment destination in Zimbabwe,” Museve added.