It is debatable which was the most pathetic sight this week: 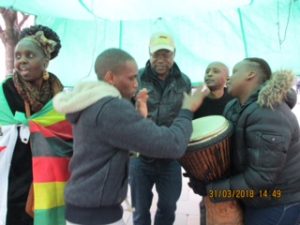 1.     Grace Mugabe complaining to the police that one of the invaders on one of her stolen farms had told her to piss off.

2.    Some of the most notorious thugs in international cricket bursting into tears when sent home to Australia in disgrace for cheating on the South African tour.

But you can read about these diversions elsewhere. The Vigil’s attention was captured instead by an article in today’s edition of the British weekly journal the Spectator under the headline ‘The democracy delusion’ by two academics Nic Cheeseman and Brian Klaas.

The article, basically an advertisement for their forthcoming book ‘How to rig an election’, argues that rigging an election to stay in power now beats not holding them at all.

They say they have criss-crossed the world ‘from Thailand to Tunisia, from Belarus to Zimbabwe’, learning the tricks of the election rigging trade. They conclude ‘the façade of democracy is being turned into a tool of oppression because an increasing number of leaders have worked out how to rig an election – or hire someone to do it for them’.

It cites as an example Azerbaijan’s 2013 elections, when President Ilham Aliyev sought to boost his democratic credentials by launching an iPhone app that enabled citizens to keep up to speed with the vote tallies as ballot counting took place. But those who were keen to try out the new technology were surprised to find that the results were posted on the app the day before the polls opened.

Or how about this wheeze: ‘In the 1998 mayoral election in St Petersburg, the authorities sought to neutralise a rising opposition figure named Oleg Sergeyev. To do this, they found a pensioner and a tram driver who were also named Oleg Sergeyev and stuck them both on the ballot next to the ‘real’ Oleg. Because no photographs appeared on the ballot papers, voters didn’t know which of the three to pick, so the vote got divided three ways, and all the Olegs lost.’

Or this one: ‘In the 2004 Ukrainian presidential election, voters in opposition areas were given pens filled with disappearing ink. When officials went to count the ballots, they just found a bunch of blanks.’

Come to think of it, weren’t there suggestions that the disappearing ink trick was done in Zimbabwe in one of our elections?

The writers conclude that, even in the West. few governments consistently live up to their rhetorical commitment to promote democracy. ‘The imperative of striking arms or oil deals and staying in power is simply more compelling than dealing with the messy and murky reality of widespread election rigging.’ (See: https://www.spectator.co.uk/2018/03/how-to-rig-an-election/.)

We will have to wait until the book is published on 24th April before we see what they say about Zimbabwe. But the authors will no doubt be aware of President Mnangagwa’s alliance with the military to rig previous elections, using the notorious Israeli company Nikuv. Zanu PF appears untroubled by the popularity of rallies addressed by the MDC’s new leader Nelson Chamisa. Perhaps their confidence is based on knowledge that the elections are already in the bag.

Certainly Mnangagwa has not allowed any real reforms to enable a credible election. Chiefs have been bought as usual, the army is deployed in the rural areas ‘to ensure order’, the electoral commission is supervised by the military, the electoral roll is still to be made available . . .

Mnngagwa’s aim is to present Zimbabwe as a newly liberated country ripe with opportunities for the outside world to exploit. The UK, for one, has shown itself to be a sucker for this. After all, people ask: is Zimbabwe any worse than most countries?

Thanks to those who arrived early to set up by putting up the banners and tarpaulin and who stayed to the end to pack up: Heath Simbarashe Jiri, Rosemary Maponga, Patricia Masamba, Bianca Monicah Mpawaenda, Ulibile Mdlongwa Nkwate and Ephraim Tapa. Thanks to Patricia, Rosemary and Bianca for looking after the front table and to Heath and Ulibile for handing out flyers.