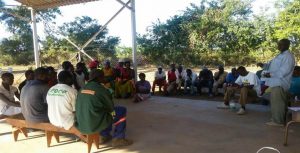 Figure 1: A Village head stresses the importance of peace before a nhimbe in Chipinge ward 01.

Community members from Chipinge and Buhera South have expressed concern over the lack of swiftness by Independent Commissions such as the Zimbabwe Electoral Commission (ZEC), National Peace and Reconciliation Commission (NPRC) and Zimbabwe Human Rights Commission (ZHRC) to respond to cases of human rights violations.

This came out during collaborative neutral platforms conducted from 8-11 May 2018 by Community Peace Clubs, Community Based Organisations (CBOs) and a Women Safe Space for Reconciliation (WSSR) that work with Heal Zimbabwe in Chipinge (wards 1,3,16 and 17) and Buhera ward 33. The collaborative neutral platforms involved cultivation of irrigation crops, cleaning of water canals and clean-up exercises. The objective of the platforms was to encourage community members to uphold peace and participate peacefully in the upcoming 2018 harmonised elections. The activities were attended by 3 Councillors, 2 Headmen, 12 village heads, 27 Village Development Committee (VIDCO) members, 7 Ward Development Committee members (WADCO). A total of 450 people attended the events.

Issues that came out during the collaborative neutral platforms include the lack of swift response by the ZEC to act decisively on the rampant collection of serial numbers of voter registration slips by Traditional leaders and ZANU PF structures. “We are very worried that ZEC has not acted or even recommended for prosecution of people who are forcing community members to submit serial numbers of voter registration slips. This is a form of intimidation”, said one community member.

Buhera ward 33 Councillor, Edwin Mabika also weighed in and highlighted that independent Commissions such as the ZHRC have not even started investigating reported cases of human rights violations. “We have reported numerous reports through the facilitation of Heal Zimbabwe to the ZHRC but to date no investigations or arrests have been conducted, this is worrisome,” he said.

Community members further appealed to the NPRC to swiftly establish early warning and early response mechanisms at ward level to monitor and respond to cases of political violence. Community members also challenged the Government to do more to ensure that the 2018 elections are conducted in a free, fair and peaceful environment. The peace clubs resolved to intensify their campaigns for peace and will utilise peace pledges from Peace Concerts, Collaborative platforms and Sports for Peace tournaments to hold community leaders to preach the message of peace ahead of the 2018 elections.