Zimbabwean President Emmerson Mnangagwa's spokesperson has reportedly said that the government is not in a hurry to arrest a political ally of former first lady Grace Mugabe, who recently returned from a self-imposed exile in South Africa. 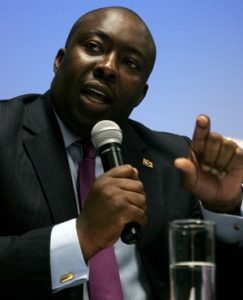 Saviour Kasukuwere landed back in Harare a week ago, six months after he fled into exile in South Africa.

Kasukuwere, a former cabinet minister, was allegedly a key member of the G40 faction in the ruling Zanu-PF party that orchestrated the sacking of Emmerson Mnangagwa as vice president in early November. It was that incident that triggered the army operation that led to former president Robert Mugabe’s resignation on November 21 and his replacement by Mnangagwa. The army said it was targeting “criminals” aroundMugabe, believed to be G40 members.

Several other ex-cabinet ministers who were loyal to Mugabe have been arrested and charged with corruption in recent months.

Charamba said the government would respect individual rights and would not bow to critics over how it handled the former local government minister’s case.

“If a citizen has a problem at law, the charges are raised against him through appropriate channels and then taken to court. That is how processes happen. [Otherwise] you will start saying human rights have been violated.

“There are processes, if someone is accused of offending against any law. The logical thing is for the aggrieved party to raise those issues in a proper legal way,” Charamba was quoted as saying.