The public media has upped its propaganda ante against the people’s leader, president Adv. Nelson Chamisa by putting words into his mouth in a desperate bid to malign and ostracize him from the women constituency of Zimbabwe. 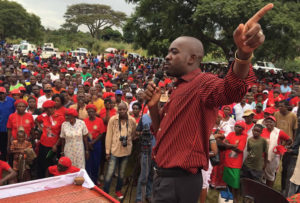 The State-owned Herald and Chronicle newspapers today published a malicious story falsely alleging that president Chamisa told a rally at Maboleni in Vungu yesterday that he was young and energetic enough to impregnate a woman when in fact he never said anything to that effect. He never made any direct or inferred reference to impregnating any woman at the rally. All he said was that he will score many positives when elected to lead the country.

In the past week alone, the public media has published 49 stories all denigrating the person of the incoming president who is set to resoundingly win the forthcoming election. The public media has incessantly concocted vulgar words and anti-women messages as purportedly coming from president Chamisa with the aim of making him unpopular with the majority women-folk in the country.

The public media clearly has an agenda to concoct lies and sculpt malice against the young and popular MDC Alliance presidential candidate in the vain hope that they will succeed in denting his towering brand and image.

The negative public media reportage provides ample evidence why we are demanding media reforms as part of a comprehensive reform package that must precede the next election. Equal, fair and impartial coverage must be the dictum of our public media.

Regardless of how many times they put words into president Chamisa’s mouth, the people of Zimbabwe will not stop reposing their faith and trust in his dynamic leadership.

Indeed, a new Zimbabwe is on the horizon.