HARARE – The Zimbabwe Electoral Commission (ZEC) has set up a special committee to deal with political violence in collaboration with other statutory bodies ahead of the 2018 polls.ZEC Chairperson Justice Priscilla Chigumba said the electoral management body condemns all forms of violence and as such has created dispute mechanisms to take care of such issues. “Political parties have a code of conduct which prevents them from electoral violence. 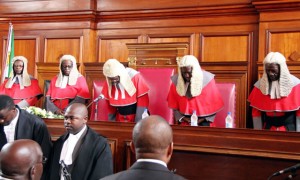 They have agreed that they will enforce their own code of conduct. The judiciary system has set up fast track courts that deal with politically motivated violence and we also need the police to investigate and send dockets to the courts on time. In fact, there are now special prosecutors and magistrates have been appointed to specially deal with such cases.”In addition to ZEC, other independent commissions involved in the dispute resolution mechanism include the Zimbabwe Human Rights Commission (ZHRC) and National Peace and Reconciliation Commission (NPRC).

The Zimbabwe Republic Police would also play a central role in the special committee to deal with political violence during the forthcoming polls. Justice Chigumba further revealed that the new mechanisms will help victims of political violence to report freely. “What we need to do is to disseminate information or people to report, because nothing can be done if a report is not made. The Zimbabwe Human Rights Commission is also playing a key role. “We will do it at a coordinated approach and form a special committee. It will be done at a national level but we will cascade it to provincial and district levels and say this is what we will be doing, she said.

ZHRC deputy chairperson, Ellen Sithole also underscored the willingness of the ZHRC to investigate cases of violence and deploy teams in communities. “The ZHRC also has an investigative mandate. The commission can investigate the conduct of any authority or person, where it is alleged that any of the human rights and freedoms set out in the Declaration of Human Rights (Chapter 4 of the Constitution) has been violated by that authority or person”, she said.

The initiative has been applauded by civic society organisations describing the move as positive as it is envisaged to reduce cases of politically motivated violence as the nation prepares for the 2018 elections.The civic society organisations said such efforts would go a long way to address political violence which has remained a permanent feature during elections, adding that it is imperative to note that such arrangements should be followed by the full implementation of constitutional provisions such as Section 210 that protect citizens against abuse by members of the security services.

This section provides for an Independent Complains mechanism with a responsibility to receive and investigate complaints from members of the public about misconduct on the part of members of the security services and for remedying any harm caused by such misconduct. Also of paramount importance is the fact that independent commissions must decentralize their activities to ward and village level so that their services can be accessed by local communities.“We implore independent commissions to continue working hand in glove with civic organisations since CSOs are extensively involved in monitoring, detecting and reporting timeously to cases of human rights violations,” the CSOs said in a statement.