Crisis in Zimbabwe Coalition (CiZC) on June 6, 2018 held a civil society coordinating meeting in Harare which was meant to deliberate on developments on the electoral front as well as to come up with civil society actions meant to push for free, fair and credible polls. 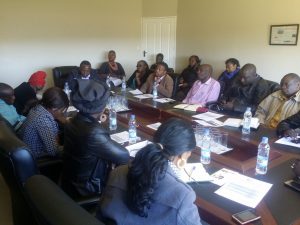 During the meeting, several irregularities pertaining to the holding of free, fair and credible polls were noted and there was consensus among the organizations present during the meeting that unless and until these are addressed, Zimbabwe risked yet another sham poll.

Chief among the irregularities that were noted included the secrecy surrounding the printing of ballot papers and the reluctance of the Zimbabwe Electoral Commission (ZEC) to release the voters’ roll a few days before the nomination court sits.

The militarization of ZEC as well as partisan reportage by the State media, which continues to act as a mouthpiece of the ruling party, Zanu (PF) were also noted as major obstacles to the credibility of the harmonized elections set to be held on July 30, 2018.

In his presentation during the meeting, Zimbabwe Democracy Institute (ZDI) Director, Dr. Pedzisai Ruhanya noted that current events ahead of the July 30 elections point to a disputed poll outcome.

“If there are contestations around the biometric voter registration system, polling stations and the availability of the voters’ roll, how do we come to accept the outcome of that election? We are a few days before nomination and we do not have the voters’ roll but one thing that is very clear is that Zanu (PF) has that voters’ roll.

“The State media is captured and ZEC itself is captured as well. The militarization of state institutions is a fundamental question that we should question with confidence,” said Dr. Ruhanya.

He also highlighted that Zanu (PF) was maintaining a stranglehold on key institutions such as Parliament, ZEC, the State media and local authorities ahead of elections as well as abusing government infrastructure and resources to buy votes and this takes away the credibility of the upcoming polls.

Election Resource Centre (ERC) Director, Tawanda Chimhini highlighted that the commitment of ZEC to preside over credible polls was highly questionable given the commission’s failure to abide to principles of transparency, accountability and impartiality.

“Our fear is that the refusal by ZEC to release the voters’ roll could be a pointer that the voters’ roll might not be as clean as we want it to be. There is also an issue around the recruitment and training of polling officers. Going into an election without knowing who the election officials are is potentially problematic,” said Chimhini.

There was consensus among organizations present that there is need to take a pro-active approach in holding ZEC to account as well as empowering ordinary citizens on the technical aspects of electoral issues.

The organizations also resolved to strengthen regional advocacy campaigns as a way of ensuring that Zimbabwe conforms to the SADC guidelines on free, fair and credible polls.

Regular engagements with various election observer missions was also identified as key in pushing for free, fair and credible polls.