Heal Zimbabwe joins the rest of Africa in commemorating the Day of the African Child. The day celebrated every year on 16 June, was set aside to remember the young people of South Africa who were massacred in Soweto in 1976 for protesting against apartheid system of education. 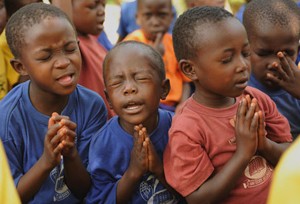 The theme for this year is “Leave No Child Behind for Africa’s Development”. The 2018 theme highlights the need to ensure that no child is left behind by specifically targeting those who are not benefitting from Africa’s growth and development. The theme also underscores the need for inclusive development for children, that is, whenever undertaking to develop programs and policies for implementing Agenda 2030, children should be at the centre-stage and Member States should ensure that no child is left behind in the drive towards sustainable economic development.

Zimbabwe is a signatory to the African Charter on the Rights and Welfare of the Child (ACRWC) which compels member states to uphold the rights and welfare of the children. According to a 2010 survey conducted by Heal Zimbabwe in Muzarabani District, 20% of families are child headed as a result of political violence that has remained a permanent feature in the area till this day. This has deprived children of their right to social services such as health and education that are explicitly provided for in the ACRWC. Children of victims of political violence from Muzarabani North ward 3, 23 and Muzarabani South ward 3 and 9 are still being discriminated against in the Basic Education Assistance Module (BEAM). Under this scheme, School Development Associations (SDA) are run by Councillors who in most instances have barred children of some victims of political violence from benefitting from BEAM citing political reasons.

To date, Heal Zimbabwe continues to record reports of such discrimination at Muringazuva Primary School, Muringazuva Secondary School, Hoya Primary School, Chiwashira Primary School and Hoya Secondary school. Because of such deprivation, one child who had both parents murdered during the 2008 political violence has been forced into early marriage at the tender age of 15 years. This is despite the fact that Article 21 of the ACRWC provides for Protection against Harmful Social and Cultural Practices where every child is to be protected from early marriage.

With Zimbabwe scheduled to conduct elections on 30 July 2018, mechanisms that seek to protect children from any form of abuse as provided for in the Zimbabwe constitution on Section 81 (e) still need to be enforced. In the past electoral periods, Heal Zimbabwe has documented gross abuse of children by political parties where in most cases children have been forced to attend political rallies at the expense of their education. In some instances, most children remain vulnerable during electoral periods in the event of eruption of political violence. Past episodes of political violence, particularly the 2008 elections left several children displaced, orphaned and vulnerable after their parents or guardians were murdered.

For Zimbabwe, the occasion of the Day of the African child offers an opportunity for Government to evaluate progress made in ensuring that children are protected from any form of abuse. Section 19 of the Constitution provides for children’s rights where every child is to be protected from maltreatment, neglect or any form of abuse and have access to appropriate education and training. In light of this, Heal Zimbabwe calls on the Government of Zimbabwe to adopt policies and measures that ensure that every child is protected from violence, abuse or torture and be protected from harmful cultural practices, exploitation and all forms of abuse. With elections fast approaching, the National Peace and Reconciliation Commission (NPRC) must without delay develop mechanisms for early detection of areas of potential conflicts and disputes especially those that directly affect children.