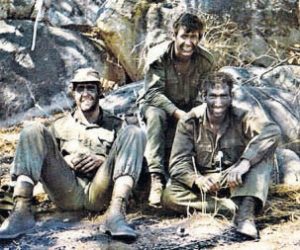 The plot to assassinate Robert Mugabe was well-planned and well-armed. The Rhodesian SAS squad, confident of success, had machineguns, rocket-propelled grenades and a bomb described as “big enough to sink a ship”. As one of commandos taking part said: “This is going to be quite something. ”In the event, as described in a new book, it failed.

Mr Mugabe, who was leading the fight for a majority black rule against Ian Smith’s government in what was then Rhodesia, now Zimbabwe, had fled before the attackers even got there — tipped off by the British. Both the attackers and others believe that the British government thwarted assassination attempts on Mr Mugabe and Joshua Nkomo, his rival in the armed struggle against minority white rule. The new book We Dared To Win: The SAS in Rhodesia, by Hannes Wessels and Andre Scheepers, describes how in February 1979 an operation to kill Mr Mugabe was launched by the SAS while he was leading his Zimbabwe African National Union (Zanu) forces from across the border in Mozambique.

With South African special forces — the so-called Recces — as escorts, they were dropped by submarine off the coast at Maputo, where  Mr Mugabe was living in the suburbs, and made their way ashore in inflatable boats.“I was carrying a bomb big enough to sink a ship,” said Rich Stannard, a commando. As they neared the house, one of his men said to him: “Good luck, sir, this is going to be quite something.” However, when they looked inside the grounds there were no signs of life. “It was clear the place had been abandoned and only recently,” Mr Stannard said. “I was itching to blow the place to pieces anyway and damn nearly pulled the pin and threw it for the hell of it. We all felt that he had been warned we were coming. It was a huge disappointment.”Wing Commander Peter Petter-Bowyer later told the BBC: “We had absolute proof.

The guy who lived across the road from Mugabe happened to be a South African. I met the man, confirmed that Mugabe was at home and all was well. But, when we got there, [he had] gone. No question, Mugabe was called.” Asked who he believed called Mr Mugabe, Mr Petter-Bowyer replied: “The Brits.”More than 30 years later David Owen, who was foreign secretary in1979, implied he was right. There had also been a failed assassination attempt on Joshua Nkomo in Zambia in 1979;a few days later Nkomo asked if Dr Owen, now Lord Owen, would make public an exchange which had passed between them. Asked by the BBC in 2011 what that was, Lord Owen said: “I think it was connected to whether or not we had tipped him off about an assassination attempt.

It seems to be a pretty sensible thing, a pretty clear link. ”Asked how they had got the information about the assassination attempt, Lord Owen said that Rhodesia’s head of intelligence, Ken Flower, was “on our side” and regularly passed information to Britain. Both Mr Mugabe and Nkomo survived the various attempts on their lives and attended the peace talks at Lancaster House in London which led to majority rule. Mr Mugabe won the elections that followed, and exercised his increasingly violent and despotic rule from 1980 until last year.

Asked if he had done the right thing, Lord Owen said: “I think assassination was not the route to peace. Mugabe was at that time, I think, the genuine choice of the Rhodesian people.“What went wrong? If we could have avoided Mugabe being the top man, then the history of Zimbabwe would have been a great deal better one. The‘ifs’ of history.”6We Dared To Win: The SAS in Rhodesia, by Hannes Wessels and Andre Scheepers, is published by Casemate.