HARARE - Police said on Sunday 49 people were hurt in the explosion at Zimbabwean President Emmerson Mnangagwa's weekend election rally, with the number expected to rise, but they were still searching for a motive for the blast. 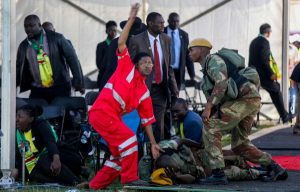 Zimbabwe holds its first post-Mugabe election on 30 July, with Mnangagwa, 75, and Nelson Chamisa, 40, the leader of the opposition Movement for Democratic Change, the main contenders.

National police spokeswoman Charity Charamba said police were pursuing leads on Saturday’s blast at a stadium in Bulawayo, the opposition heartland where Mnangagwa’s ruling ZANU-PF party has lost all national elections since 2000.

Mnangagwa escaped injury and said the explosion would not derail the election.

“We expect the number to rise as some victims might come forward during the course of the day,” Charamba told reporters, adding a “substantial reward” was being offered for information. She did not give details.

It was not clear who was responsible for the explosion, which Mnangagwa called a cowardly act, or how the security around the president was breached.

Mnangagwa adopted most of Mugabe’s security and bureaucratic system, fearing a complete overhaul, which the military had sought, could cause instability in government and likely cost him votes.

As internal security minister at independence in 1980, Mnangagwa built the system that protected and propped up Mugabe. But over the years, as tensions rose over who would succeed the 94-year-old, the system broke into factions.

Without mentioning names, Mnangagwa said there were some people who did not accept his presidency and said his “usual enemies” were behind the blast.

Two sources close to Mnangagwa said some Mugabe loyalists in the security and government establishment were “hurting” over the November coup.

“You cannot say this is a terrorist act and neither can you say it was done by state actors who want to take power. These are people who are hurting, who want to harm the president and they have access,” one of the sources told Reuters, declining to be named due to the sensitivity of the issue.

Among Zimbabwe’s small but vibrant Twitter and Facebook communities, people posted various theories, including accusations that this was an inside job meant to gain sympathy votes in an opposition stronghold.

Hasnain Malik, global head of equity research at Exotix Capital said Saturday’s incident could have been a result of tensions within Mnangagwa’s government.

“There are two long-standing tensions in Zimbabwe: First, within ZANU-PF, between Mnangagwa’s Lacoste faction and Mugabe’s G40 factions, with an undertone of tribal tension,” Malik said in a note to investors.