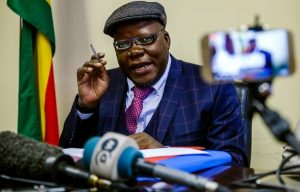 MDC Alliance Spokesperson Tendai Biti speaks during a press conference where he announced that Zimbabwe’s opposition parties are calling for electoral reforms ahead of the July 30 general elections and that there will be street demonstration. Photo: Jekesai NJIKIZANA / AFP

The alliance will protest against the Zimbabwe Electoral Commission, which it accuses of planning to rig next month’s elections in favour of the governing Zanu-PF.

The opposition coalition said there will be no elections in Zimbabwe unless there is a level playing field between political parties.

Next month’s elections on July 30 are the first without former long-time president Robert Mugabe.

According to Tendai Biti, a senior MDC Alliance official, “It will be a peaceful march. In terms of the constitution, we are allowed by law to do this.

“We going to do this because this election is so important and we want a  free fair and credible elections. Our peaceful negotiations have yielded nothing so far and we will be flooding the streets of Harare on Tuesday the 5th of June 208.”

Biti also claimed the army is now running the Zimbabwe Electoral Commission (ZEC) and campaigning for Zanu-PF in rural areas.

He wants villages to be demilitarised and said the ZEC has not made the voters’ roll available to opposition parties, just eight weeks before the election.

The MDC suspects the ZEC is planning to rig the election.

The opposition coalition wants to know which company will print the ballot papers and is also demanding equal access to state media.

Over 100 political parties will take part in the election, but the main contest is expected to be between President Emmerson Mnangagwa of the governing Zanu-PF and MDC Alliance leader Nelson Chamisa.