Last month, Zimbabwean Permanent Secretary for Information Media and Broadcasting Services George Charamba told the press that Zimbabwe's upcoming July 30 elections are “an instrument of foreign policy.” This is a strange way to think about a democratic exercise, and it raises serious concerns about Zimbabwe's future. 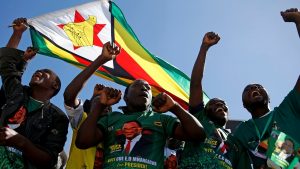 When the military ousted former President Robert Mugabe in November 2017, the people of Zimbabwe judged that the benefits of change at the top surpassed the drawbacks of a military-led transition. Thus, they avoided calling the event a coup. Emmerson Mnangagwa, a longtime senior aid to Mugabe, became president, and the commander of the defense forces became vice president, reinforcing the military backing for the new order. Along with other ruling party stalwarts from the Mugabe era, they set about consolidating their new positions and recasting themselves as agents of change.

Since then, Mnangagwa’s government has been on a relentless global charm offensive, enthusiastically expressing a desire to “rejoin the community of nations” and normalize Zimbabwe’s place in the world. Their campaign is motivated not only by a desire for foreign investment to rescue the nearly bankrupt economy, but by an expressly stated desire for international legitimacy – the type that would make targeted sanctions disappear and trigger support from international financial institutions. While this appeal to the outside world has become the focus of a domestic electoral exercise, it fails to gain legitimacy in the eyes of Zimbabweans themselves.

Moreover, this prioritization of foreign relations is manifest in the election preparations themselves. The government of Zimbabwe has formally invited international observers, in marked contrast to previous elections. While this is a welcome development, they have been far less eager to ensure that arrangements are in place for domestic observers – for the people who actually possess the necessary language skills, historical awareness, and cultural context to understand what is happening on the ground.

After weeks of delay that prompted legal challenges and eroded confidence in the integrity of the electoral process, the Zimbabwe Elections Commission finally released the voter’s roll only after it was too late to address any irregularities. However, it appears that the government of the United Kingdom, which has been markedly enthusiastic about Mnangagwa’s government, obtained a copy of the roll before opposition parties in Zimbabwe itself. This kind of discrepancy raises real questions about whom this electoral exercise is really for yet again.

None of this is lost on the long-suffering Zimbabwean people. They have noticed that those in charge seem more interested in winning the approval of an international audience than in winning the trust of the domestic population, choosing to relegate them to the cheap seats in their own country. It will be essential to listen to Zimbabwean voices, and to look beyond the election itself for real evidence that democratic accountability and the rule of law are operational within Zimbabwe’s borders. Only then can the rest of the world assess whether real change has come to Zimbabwe.