Harare, Zimbabwe (CNN)For the first time in a generation, there will be a glaring omission on the ballot form when Zimbabweans go to the polls on Monday.

Robert Mugabe may have disappeared from the public view, but his ghost still lingers over a vote which threatens to be one of the closest in the country’s history.

Mugabe, now 94, ruled Zimbabwe for 37 years before resigning last November amid the pressure of a military takeover and the humiliation of impeachment. 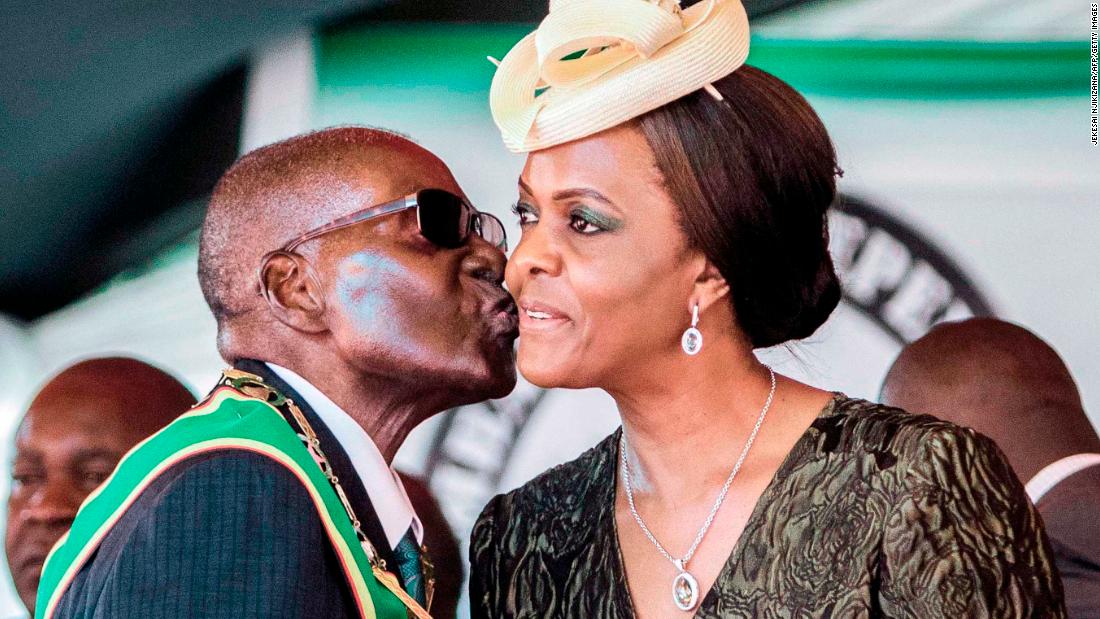 Former President Robert Mugabe kisses his wife and former first lady Grace Mugabe during the country’s 37th Independence Day celebrations in 2017.
Emmerson Mnangagwa, the man who Mugabe fired as his deputy only weeks before his resignation while attempting to have his wife appointed as his successor, now leads the country and the Zanu-PF party.
Mugabe has rarely been seen in public since, instead spending his time between Singapore, where he is receiving medical treatment, and his plush 25-room Blue House residence in the nation’s capital Harare.
Sightings of Mugabe’s wife Grace, nicknamed “Gucci Grace” for her love of a lavish lifestyle, have become similarly scarce.
But on Sunday, Mugabe made a rare public appearance to declare he would not vote for his successor Mnangagwa. 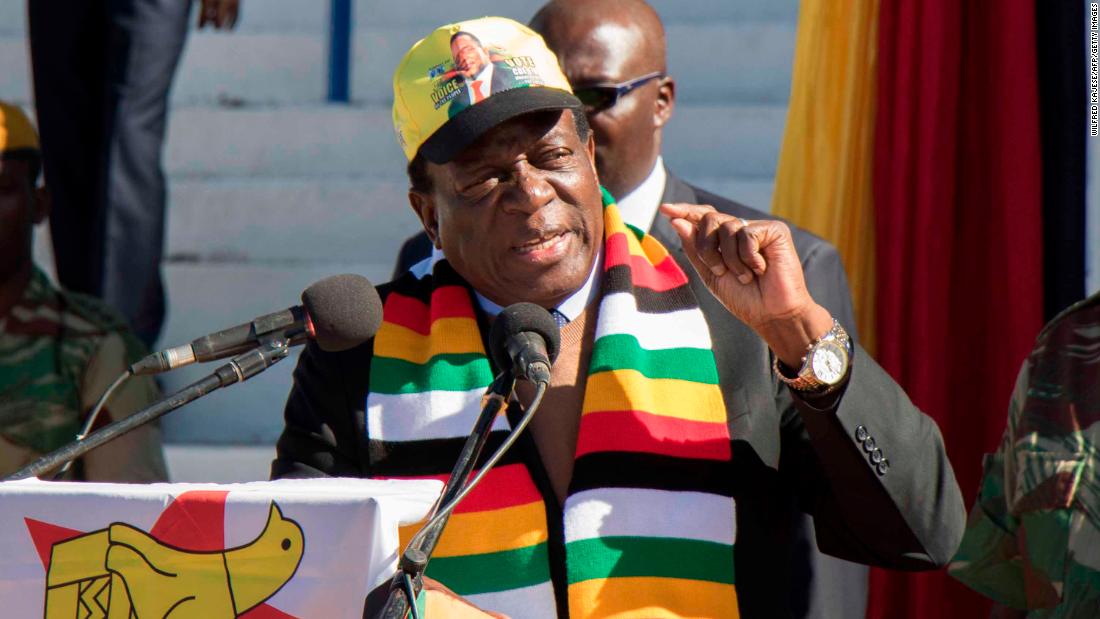 Zimbabwean President Emmerson Mnangagwa addresses a meeting attended by farmers and businessmen from the Zimbabwean White community ahead of this month’s elections.
“I can’t vote for Zanu-PF. I can’t vote for the people who have brought me into this state,” Mugabe said during a news conference at his mansion in Harare, on the eve of the election.
“I must say clearly I cannot vote for those who have tormented me. I can’t. I will make my case among the other 22 [out of the 23 candidates].”
The former leader added it was “painful” that his name would not be on the voting ballot but that it was “the reality.”
Before Sunday “Mugabe himself has not been visible, he’s not been saying much about this election,” Dewa Mavhinga, Southern Africa Director of Human Rights Watch told CNN.
“There are people who remain loyal to him within Zanu-PF, so that would be a factor — and that factor might actually reduce the levels of support that the presidential candidate for Zanu-PF enjoys.”
That candidate is the current president, Mnangagwa, who has attempted to rebrand the ruling Zanu-PF party. He has already survived one attempt on his life ahead of this election when a grenade was thrown at the stage during a campaign rally last month.
The 75-year-old is still widely considered as Mugabe’s man given that he worked so closely with him for more than 40 years, first as his special assistant during the 1977 liberation war, and later as security minister and justice minister.
Mnangagwa has pledged to heal divisions and rebuild the country. “Some have eyes but they do not see, others have ears but cannot hear that we are in a new Zimbabwe,” he told a Zanu-PF rally last week, Reuters reported. “Together we will rebuild our nation, a new prosperous Zimbabwe for our people.”

The legitimacy of this election has already become a hot topic, the first with some semblance of a contest since the country became independent in 1980. 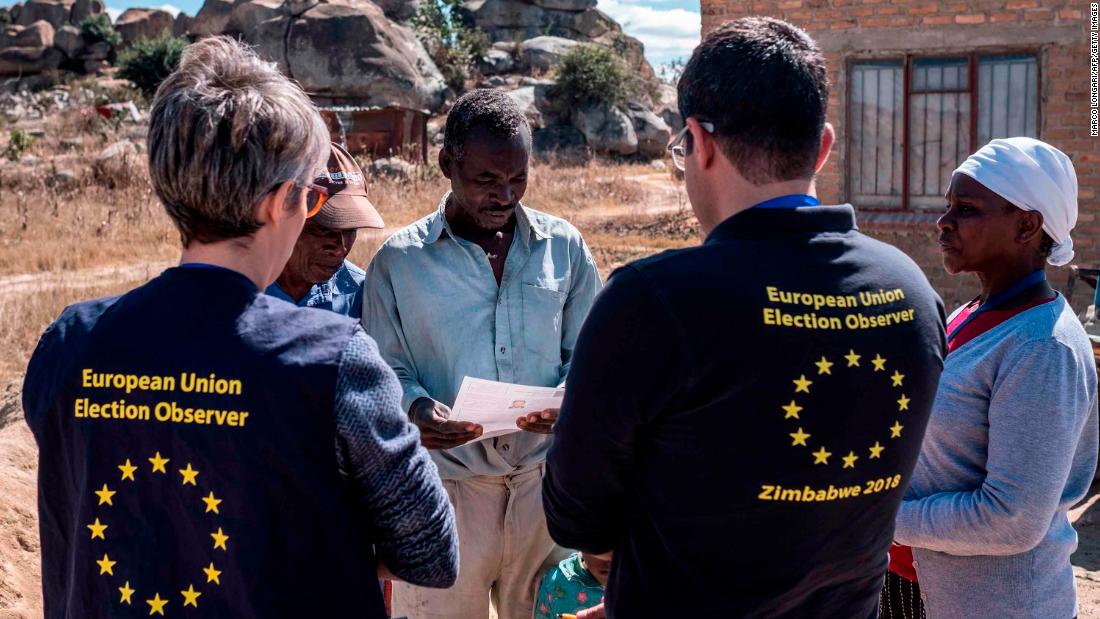 Members of a European Union election observation team speak to voters in Nyatsime, on July 24, 2018.
Last week, the spokesperson for the UN High Commissioner for Human Rights raised concerns of voter intimidation and threats of violence, ahead of Monday’s vote.
While UNHCR spokesperson Liz Throssell also noted the presence of election monitors for the first time and said the presence of human rights groups being present around the election was a “welcome sign,” there is still some skepticism. 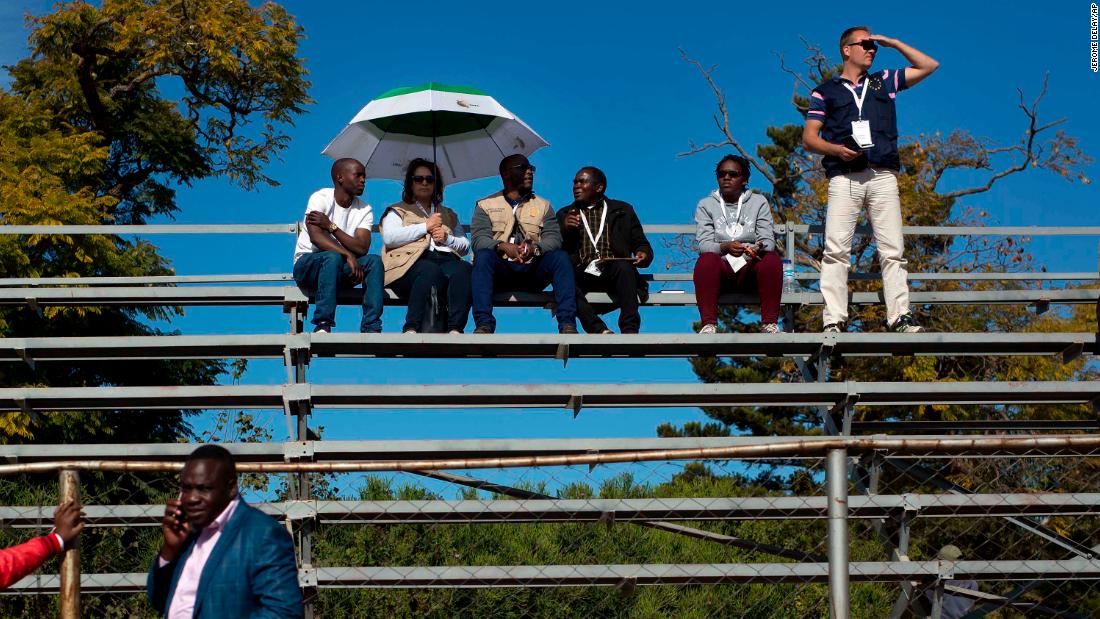 Elections observers from the European Union and the African Union sit on bleachers as leading opposition challenger Nelson Chamisa addresses a campaign rally in Bulawayo.
“It’s like a smokescreen,” Mavhinga says of the current election setup.
“I think it’s a good pretend game which might soon be discarded if a vote goes against the ruling party.
“People are fairly free, I’m talking to you from a hotel I’m putting on my Human Rights Watch T-shirt, I’m freely talking about what is happening and no one is bothering me — so that’s different,” he said.
“It is not because they are not observing it, it’s just that the machinery has been put on hold. But if an order is given then things could change very rapidly.”
The Zimbabwe Electoral Commission hopes any allegations of vote rigging will be prevented by the introduction of a fingerprint ID system which is designed to prevent citizens from registering more than once. Election monitors have also been allowed to observe the run-up to the campaign and will be present on the day.

The election is forecast to be a close affair between Mnangagwa and Movement for Democratic Change (MDC) leader Nelson Chamisa, who at the age of 40, is the youngest ever presidential candidate. 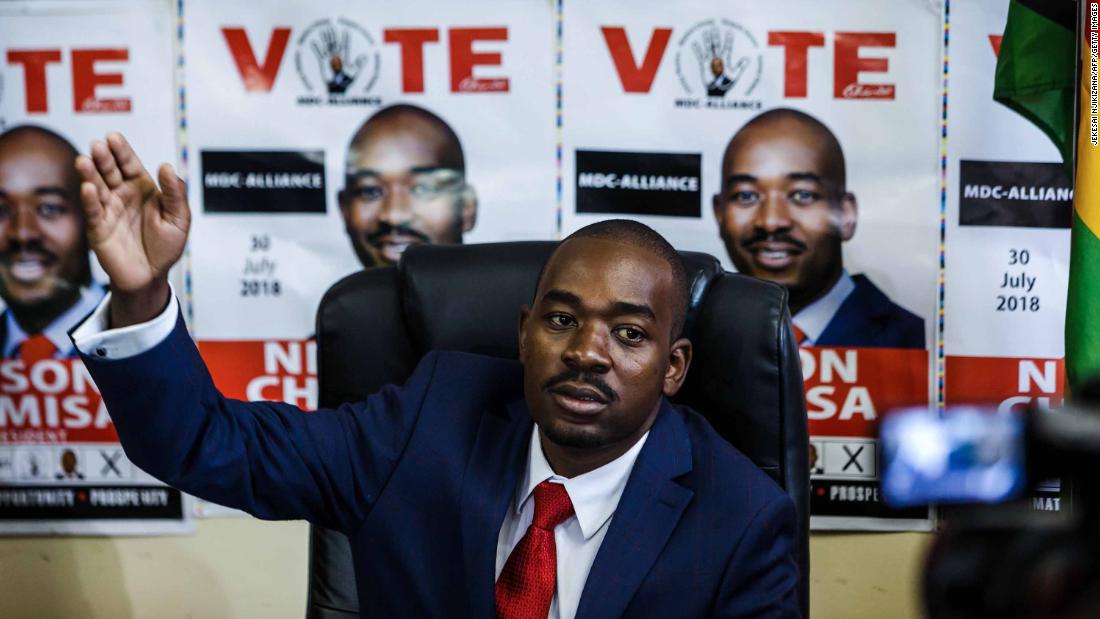 Zimbabwe’s Movement for Democratic Change (MDC) party leader Nelson Chamisa holds a press conference at the MDC headquarters in Harare.
Chamisa took over the leadership of the MDC following the death of its founder and political heavyweight Morgan Tsvangirai, who died from cancer in February.
Chamisa is hoping to target younger voters with promises of electoral reform, tax cuts and jobs. “People are connecting with young leadership,” Chamisa told Agence-France Presse.
“Young people are taking charge, look at France, look at Canada … look at the United States,” he said.
While his message may strike a chord, he does not have the same level of backing from the security forces or military who oversaw Mugabe’s departure.
If no candidate secures more than 50 per cent of the vote on 30 July, there will be a run-off on 8 September.
Both men face a mighty challenge to help the country recover from the dire economic situation which was inflicted upon it by Mugabe’s rule. 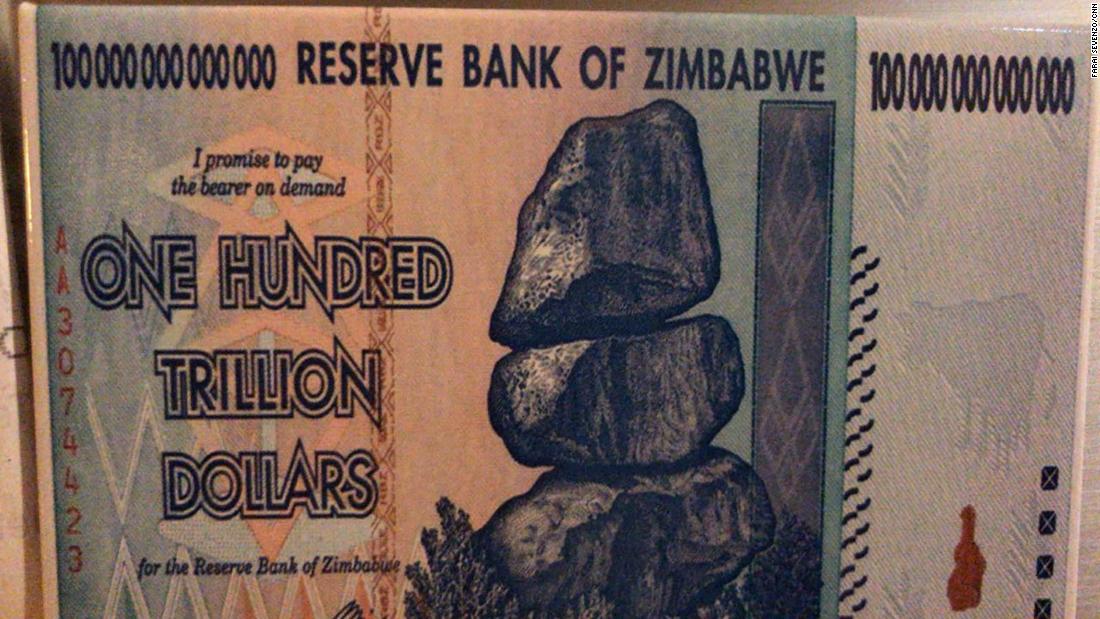 A 100 trillion dollar note from the era before Zimbabwe dropped its own currency and adopted the US dollar.
A chaotic land reform program coupled with hyper-inflation that saw the world’s first trillion dollar notes killed Zimbabwe’s economy during Mugabe’s rule.
Later, under a government of National Unity that included Tsvangirai as Prime Minister, the country was forced to dump its currency and adopt the US dollar.
Relics of Zimbabwe’s notorious economic collapse line Harare’s streets– tattered bank notes, vendors selling junk, gate after gate of abandoned factories locked and shut.
There has been some progress with lines of credit being opened between Zimbabwe and the UK, a longstanding opponent of Mugabe’s rule, while the European Union has been making encouraging noises over the new regime.

‘Look at the poverty’

For many Zimbabweans the lack of economic progress is evident on a daily basis, a constant reminder of life under Mugabe. 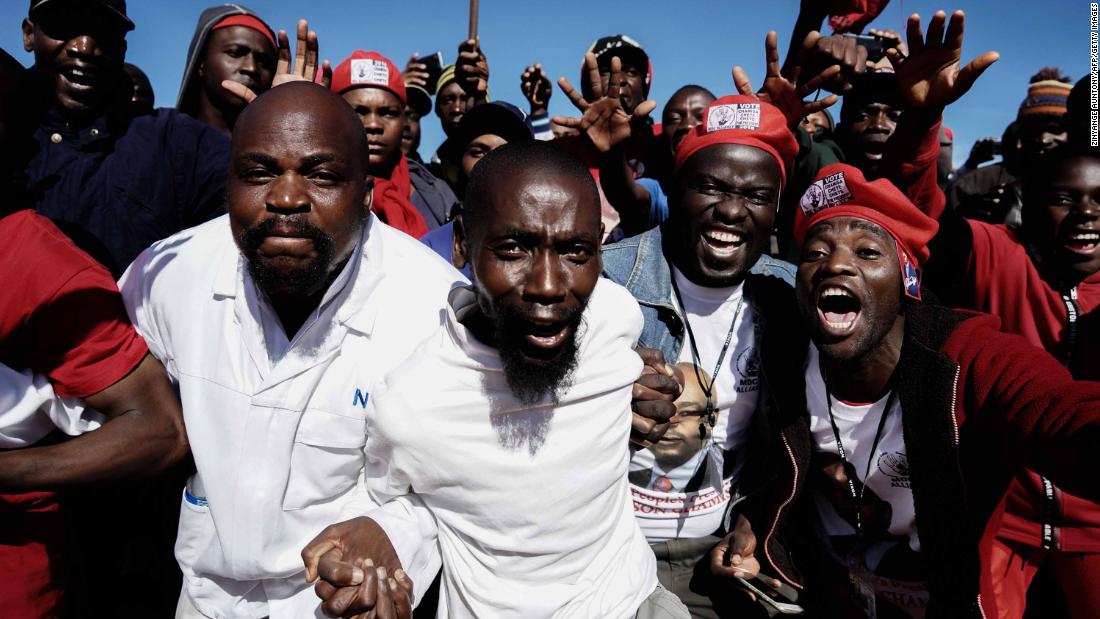 Movement for Democratic Change supporters cheer as they gather to listen to their leader Nelson Chamisa.
“I haven’t seen much change since November, to be honest,” Pearson Mvurume, a 33-year-old cattle herder in Mutare, Zimbabwe’s Eastern Highlands, told CNN.
“Even up to now, nothing has changed. I want to see change on July 30, that’s when change will come. That’s the truth of it.”
Mvurume says he will vote for Chamisa in the upcoming election, claiming it was the “only chance for change.”
“Look at the poverty around you, these aren’t real jobs,” he says.
“We are looking forward to real jobs that will come. Look at what I’m doing, herding cattle. That’s not a job.”
Tafadzwa Chapambare, who also lives in Mutare, told CNN he had never had a job despite being 28 years of age.
“They say if you didn’t go to school there will be no job for you, so how are we to survive?” Champambare asked.
“We just want the companies to reopen so we can all have jobs. We have all registered to vote and all we want are jobs in Zimbabwe. And once we vote we want to see changes — that’s all we want in this country.”
Post published in: Featured