PRETORIA - The South African government will embrace and work closely with whoever emerges victorious in the tightly contested general election in neighbouring Zimbabwe, President Cyril Ramaphosa said on Monday. 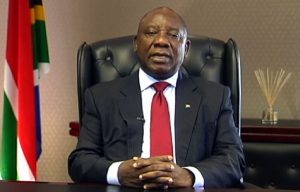 File: The South African government will embrace and work closely with whoever emerges victorious in the tightly contested general election in neighbouring Zimbabwe, President Cyril Ramaphosa said on Monday.

“We are very pleased to hear that the election has started off very well, there are no violent acts, and it means the people of Zimbabwe are determined to ensure that they install a government that will be representative of all the people of that country. We support them,” Ramaphosa told journalists in Pretoria.

“We are saying, whichever party that emerges victorious, we are prepared to work with them as South Africa. We wish them the very best. We are looking forward to go to the [presidential] inauguration once the election results have been announced.”

Ramaphosa said so far, “everything seems to be going well” in the elections, the first polls after former Zimbabwean president Robert Mugabe’s exit.

On Sunday, just a day before the polls, a frail looking Mugabe addressed journalists in Harare, taking a dig at his former lieutenant Mnangagwa and endorsing Chamisa.