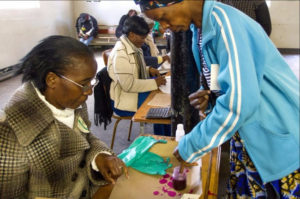 Reports of police officers in Bulawayo casting postal votes under the watchful eyes of their superior officers have raised questions about the postal voting system.  In this Election Watch we shall explain how the system is supposed to work.  We shall also explain that there are differences between how postal voting is done in this election and how it used to be done.

All Votes Counted at Polling Stations

The counting of votes at polling stations will be done in the presence of candidates, polling agents and election observers, so it should be transparent.

Very briefly, the postal voting system entails the following steps.  Certain voters who will not be able to get to their polling stations on polling day can apply to ZEC for a postal vote.  ZEC sends each applicant a ballot paper for each election – Presidential, Constituency and Local Authorities, plus an envelope marked with details of their polling station.  The voter puts an X on the each ballot paper opposite the candidate of his or her choice, seals each ballot paper into its envelope and sends the envelopes back to ZEC.  ZEC then distributes the envelopes, in tamper-proof packets, to the voters’ polling stations where they are counted along with the ordinary votes.  [All these steps are explained in more detail below.]

Obviously, if postal votes are to be delivered to the correct polling stations in time to be counted, the voters have to record their votes on their postal ballot papers and get them back to ZEC well before polling day.

Who is Entitled to a Postal Vote

In terms of section 72 of the Electoral Act, the only people who can vote by post are registered voters who, on polling day, will be unable to vote at their polling station because:

So only government employees and employees of ZEC, and persons who are seconded to ZEC for electoral duties, are entitled to vote by post.

Applications for postal votes must be sent to ZEC no later than two weeks after nomination day [section 73(2)(c) of the Electoral Act].  This, incidentally, means it is now too late for teachers assigned to electoral duties to apply for postal votes.  The best they can do is to ask ZEC to be given duties near the polling stations where they have to cast their votes.  If that is impossible they will be faced with an unpleasant choice:  either refuse to go on electoral duty and face possible disciplinary proceedings, or go on electoral duty and lose the opportunity to exercise their right to vote.

If ZEC is satisfied that a person who has applied for a postal vote is entitled to one, the Chief Electoral Officer must send them a postal ballot paper for each election plus envelopes marked with the applicant’s name, voter registration number and the polling station on whose roll the applicant is registered.  He must also take two further steps:

These steps are laid down in section 74 of the Electoral Act.  If they are followed they will prevent, or at least discourage, double voting by people who have voted by post.

Postal voters vote by filling in their ballot papers in the same way as voters at polling stations – by putting an X opposite the candidates of their choice.  They must then seal the ballot papers into their covering envelopes and have them sent back to ZEC at least 14 days before polling in the election, to give ZEC time to have them distributed to polling stations.  This is laid down in sections 75 and 76 of the Electoral Act.

Three points need to be emphasised:

The Electoral Act envisages that applications for postal ballots by members of disciplined forces are sent to ZEC in bulk, through the members’ commanding officers, though the application forms must be filled in individually by the members themselves.  Similarly, though the Act does not say so expressly, ZEC can send postal ballot papers and their covering envelopes in bulk back to the commanding officers for distribution to the members.  And, though again the Act does not say this expressly, the commanding officers can send the members’ completed ballot papers, sealed in their covering envelopes, back to ZEC in bulk.

What this implies is that members of disciplined forces can be brought together in one place to vote by post, so long as they are able to vote in secret.

Distribution and Opening of Postal Votes

The Chief Elections Officer is obliged to keep a list of all ballot paper envelopes received by ZEC, showing the names of the voters and their constituencies, and the list must be kept open to public inspection for the whole election period [section 76(3) of the Electoral Act].  He must also send constituency elections officers notes indicating the number of postal ballot paper envelopes he distributes to them.  When the envelopes are opened and counted, the numbers of envelopes opened must be tallied with the numbers indicated on the notes.

Opening and Counting of Postal Ballots

In the forthcoming election this will be done at polling stations rather than at ward or constituency level, as was the case previously.  It is a welcome change because the opening and counting will be done in the presence of candidates, their agents and election observers.

Postal ballot envelopes will be opened when voting at the polling station is closed before any votes are counted.  The postal ballots will be put into three separate packets, one for Presidential votes, one for constituency votes and one for local authority votes.  They are then counted along with the ordinary votes.  This is laid down in section 78 of the Electoral Act.

The procedures for postal voting are probably the most controversial part of our electoral system.  In all the general elections since 2000 there have been allegations that results have been rigged with fraudulent postal ballots and that police officers and members of the Defence Forces have been compelled to vote for particular candidates.  These suspicions are not peculiar to Zimbabwe:  it is widely recognised that postal ballots are the easiest part of an electoral system to manipulate.  Nonetheless, every electoral system has to make provision for voting by people who are unable to cast their votes at polling stations, and, in the light of Zimbabwe’s present technological development, postal voting is the only feasible way to allow those people to vote.

As we have seen, our law contains provisions designed to make postal voting more transparent and secure.  To recap, they are as follows:

All these provisions depend for their effectiveness on the vigilance of election observers, election agents, polling agents, journalists and the public.  There is no point in requiring ZEC to keep lists of applications for postal votes, postal ballot papers issued and postal ballots received if no one examines the lists to make sure that the numbers tally and that the postal ballots sent to each polling station correspond with the list of ballot papers received by ZEC.  And there is little point in requiring postal ballots to be tallied at polling stations if observers and election agents are not present to witness it.

In other words, statutory provisions requiring processes to be transparent and open are useless if observers don’t open their eyes and look.

Where more transparency is needed

An important defect in the Electoral Act is that there is no provision for postal voting by police officers and members of the Defence Forces to be observed by election observers or polling agents or anyone else.  So while there is nothing wrong in police officers queuing outside a building in order to cast their postal votes – as we have noted, postal votes must be cast well before polling day – no one outside the Police Service knows if, once inside the building, the officers were allowed to cast their votes in secret.  And if they were not, all the other precautions against the rigging of postal votes will be futile.

ZEC’s task is not just to conduct the elections freely and fairly but to convince everyone–  candidates, parties, observers and the Zimbabwean public  –  that the elections are indeed free and fair.  In other words, ZEC must build trust by ensuring that all electoral processes are conducted transparently.  Postal voting has been controversial in past elections, so ZEC should have taken steps for voting by police and Defence Force members to be observed by accredited election observers and election agents.  Although the Electoral Act does not require it, as we have said, ZEC could legitimately, under section 352 of the Constitution, have directed the police and Defence Force authorities to see that their members voted by post in the presence of observers.  If ZEC had done this, the renewed controversy over postal voting would not have arisen.