Zimbabwe Human Rights Organisation (ZHRO)members walked 105 km from Brighton to London to highlight the violence and election chaos in Zimbabwe. 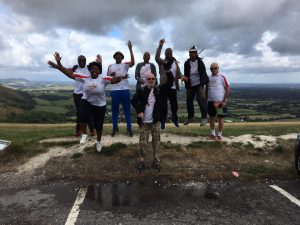 “ Our ‘Walk for Freedom’ is not just a slogan, it’s a demand for democracy in Zimbabwe”, said members on the walk.

The walkers started at 07:15am on Friday 10th August from Brighton Pier – finishing in London at Kempton Park – the venue of ZIMFEST – on Saturday 11th August – just before 09:00 am. Rashiwe Bayisayi finishing in a record time of 25 hours 45 minutes pointed out the injustice of the rigging to subvert the democratic choice of the electorate.

Despite the impression of electoral competition and choice, the Zimbabwe elections brought about more uncertainty, division, violence, and continuity with ‘old-style’ Zanu PF, than change.

The challenge in the Constitutional Court being waged now is further evidence of the capture of the Zimbabwe Electoral Commission (ZEC). Data analysis of V11’s posted at polling stations on the evening of the election [30th July] seem to indicate that ZEC have posted different numbers.

“We want elections that are truly transformative like those of democratic states -the 30 July elections have proved otherwise, rigging has become the norm and again the opposition has been able to show that there was yet another electoral manipulation”  said one of the walkers.

Rigging began when the opposition was prevented from being heard through the government controlled national broadcasters and then the ‘stuffing’ of ballot boxes that occurred during the counting – adding fake votes. Data mining techniques have unearthed significant double counting by the inclusion of votes in additional polling stations to inflate turnout and totals.

Backed by SADC and AU, the Junta are now playing the international community, duping everyone including the U.K. into legitimatising these poor-quality polls.

Existing analysis of the elections seem to concentrate on the manipulation of the V11 forms after the election vote, listing out a multiplicity of different strategies used by the Junta.

On the 1st of August the Junta responded with extremely disproportionate and excessive force, shooting and bayoneting innocent civilians that included, a woman leaving her work, and a dumb vendor. Many in Zanu PF have even tried to place the blame on the opposition without considering the culpability of the those who ordered the shooting and bayoneting.

The treatment of Tendai Biti has garnered international condemnation due to serious breeches of agreed UNHRC protocols. Indeed so serious that the USA has convoked the ambassadors of both Zimbabwe and Zambia to register their “gravest concerns.”