Zimbabwe’s incumbent president, Emmerson Mnangagwa, passed his first electoral test early on Friday morning when he became president again with a slender 50.8% of the vote, against the opposition MDC Alliance’s Nelson Chamisa’s 44.3%. However, unlike in November 2017, when Mnangagwa overthrew Robert Mugabe, the capital Harare resembled a ghost town. 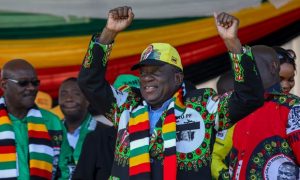 As the final election results flashed on the television screen in the Pariah State bar in Harare’s posh Borrowdale suburb, a young woman with an energy drink got tears in her eyes.

“No, they cheated,” she said quietly.

“What happened in November, why can’t it happen now? We must have a war. As long as Zanu-PF is here, we will never have free elections.”

She was referring to the coup in 2017 that saw former president Robert Mugabe replaced by Mnangagwa, followed by people taking to the city’s streets to celebrate.

It was already a bit after midnight, and the bar manager had hoped to close early because it was quiet. Thursdays – Zimbabweans call it “ladies’ night” – is a popular drinking day, but business wasn’t good enough to stay open until the usual 02:00 or 03:00.

A late announcement of the tenth province, Mashonaland West, made him a little lenient. Many had been waiting all night for the results, getting slightly plastered in the process. Ten or so drinkers were glued to the large screen with the eNCA live results broadcast.

Outside, however, Harare was a ghost town. Opposition MDC Alliance candidate Nelson Chamisa got more than twice the votes Mnangagwa received, so it’s no surprise the residents of Zimbabwe’s capital were not celebrating.

In addition, there had been soldiers on the streets for the past 24 hours following protests in which six people were shot dead on Wednesday, and this inspired most residents to hide out in their homes. On Thursday there were reports that soldiers ordered businesses in the city centre to close early – the police later denied there was such an order – and later there were reports of soldiers shutting down bars well before the 22:00 start of the announcement of the results. In suburbs like Borrowdale, however, no soldiers were visible.

They did, however, lurk at the entrance and in the lobby of the Rainbow Towers Hotel, some 10km away, which housed the elections results centre.

At the door an X-ray machine and metal detector were installed just hours before the results announcement, fresh from the box, but even as journalists were filing into the hotel to take up their places ahead of the announcement, security staff were still testing the machine.

Mnangagwa was elected president with 50.8% of the vote, and Chamisa garnered a respectable 44.3%. Anything lower than a 50% plus one win would have forced a run-off.

There was a huge turnout of registered voters – 84.8% in all.

It’s hard, however, to find an MDC supporter who didn’t believe the vote was cooked. One bar patron said it was all just too conveniently calculated – from Zanu-PF’s two-thirds majority in Parliament to the narrow avoidance of a potentially messy run-off.

Referring to the 40-year-old Chamisa, he said: “I will say the young man did a very good job to keep the guys on their toes, but he lacked maturity and insight. He gave ED (Mnangagwa) a good run, but he fell short.”

His drinking buddy, a Chamisa fan, grudgingly agreed that Mnangagwa could be good, but he had reservations.

“If Mnangagwa is in power, Zimbabwe will be open for business, but if the military is in charge, I don’t know. His heart is in the right place, but I don’t trust the military.”

The good news was, however, that the two men could peacefully share a drink. Many previous elections were marred by violence and people were too afraid to talk openly about their political opinions.

It’s not clear what will happen next in government. Thirty-seven-year-old development worker Cleto Manjova thought Mnangagwa would not offer Chamisa a position in his new government because “the culture is grab-and-go” and there were too many people who needed to be rewarded.

“If it happens, I believe Chamisa will not accept it,” he predicted.

Such power-sharing should already have happened in November if there were any goodwill in it, he said.

Chamisa told journalists at a press conference a few hours before that the MDC would publish its own results. He hinted that a police raid at the party’s headquarters earlier in the day was aimed at confiscating computers and equipment used to collate results independently, but these had been removed by the party earlier. It’s a crime in Zimbabwe to publish such collated results independently.

In the results centre there was some drama when MDC chairperson Morgan Komichi, shortly before the final announcement, got up and cried foul. He was escorted out by a security guard soon after.

An MDC official said off the record that the party might go to the courts to challenge the results, but unlike what happened after Kenya’s elections in August 2017, when the results were overturned in court, this would be a cosmetic exercise as Zimbabwe’s judiciary is much beholden to the ruling party.

Perhaps Chamisa, like Kenyan opposition leader Raila Odinga, would go ahead and have a “people’s inauguration” afterwards, and declare himself president. Chamisa did, after all, tell journalists that if there wasn’t a power-sharing agreement, the MDC would govern through “idea-sharing”.

Maybe this points to an appointed position in Mnangagwa’s government after all, or perhaps he was hoping for a government of national unity type of negotiation to materialise.

Some of the winners were magnanimous earlier about a possible defeat, which they knew wouldn’t come.

By that time, however, the party already had the results of the parliamentary election, which gave it a two-thirds majority of seats.

Some in the MDC, however, are threatening war, saying young people like Chamisa were disenchanted with the apparent non-delivery of democracy.

For the immediate future, however, most Zimbaweans appear to be thirsting for some peace. DM