I was there in 2000 when Zanu-PF decided that this thing called the rule of law was not for Zimbabwe. It was a decisive moment in the country’s democratic history. 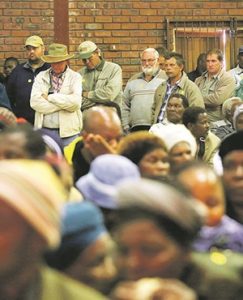 Hundreds of people gathered in Vryheid, KwaZulu-Natal, on July 18 for public hearings on land expropriation, however, President Cyril Ramaphosa has already made up his mind. PHOTO: Gallo Images

Zimbabwe was not a perfect democracy before, but it was a functioning society with a good set of rules to which state and non-state players adhered. When the power-grabbing Zanu-PF stepped out of line, there were mechanisms in place to hold it to account, including a solid judiciary and vibrant civil society. What Zimbabwe lacked in political plurality, it made up for in civil society activism.

The Zimbabwean economy was by no means booming. In fact, a series of fiscal blunders had dealt the economy a blow on the chin that left it staggering backwards towards the ropes. The currency was jittery and inflation was on a steep rise. But there was structure, form and order.

Then Zanu-PF got spooked by a humiliating referendum defeat of its constitutional reform proposals and decided to throw the rule book out of the window. Fearing that the referendum result was a portent of things to come in the parliamentary elections a few months hence, it embarked on a reckless and bloody land reform programme.

Waving the slogan “The Economy is the land and the land is the economy”, former president Robert Mugabe’s government went on to wreck the economy by sponsoring the illegal seizure of mainly white commercial farms.

Spewing emotive rhetoric about the colonial past and racially skewed economic ownership patterns, Zanu-PF labelled those who were warning against the breakdown in the rule of law and the assault on the economy as agents of the imperialist West.

What followed was a textbook case of how to ruin a country. Fortunately, history has recorded in immaculate detail how a self-interested decision by a political party to salvage its own fortunes got the ball rolling on the wanton destruction of the pillars of a society and generalised disregard for the norms of a democracy. And, of course, the irreparable damage to the economy.

South Africans see the fruits of damage by the large number of Lovemores, Knowmores, Nomatters, Anyhows, Anyways, Nevers, Praisegods, Jealousys and Settlements they come across every day.

Fast forward to the year 2018 in South Africa, the land that the Lovemores and Praisegods chose to make their home after Zanu-PF destroyed the rule of law and the country they loved. South Africa’s governing party – which was once a repository of wisdom, intellect and logic – decided to copy Zanu-PF’s script.

Faced with the prospect of the Economic Freedom Fighters outflanking it with its radical rhetoric and stealing a chunk of votes and jeopardising its electoral majority in next year’s general elections, the ANC has convinced itself that the Zanu-PF route is the way to go, regardless of the collateral damage to the country’s economy and democratic fabric.

What began as a desperate and silly tactic by a double-headed specimen from KwaZulu-Natal has now become the ANC’s main policy thrust as the election campaigns begin to take shape.

Like Zanu-PF all those years ago, the ANC has recognised the emotive issue of land dispossession by the colonial and apartheid powers and made this its central platform. Just like Zanu-PF’s misguided slogan of 2000, the ANC is selling the myth that the resolution of the land question is the panacea to poverty and the sure path to prosperity for all; that the reason the whites have money and blacks are poor is this darned thing called section 25 of the Constitution.

And, like Zanu-PF, the culprit for slow land reform, restitution and redistribution is not the politicians and bureaucrats who did not see this as a priority for more than two decades. The culprit is the Constitution, the rock upon which the rule of law is built. Amend section 25 and all will be well. When we have expropriation without compensation, there shall be cheese, chocolate and ice cream for all.

After the adoption of the cleverly worded resolution at the ANC’s conference in December, there was hope that when the matter left the heated halls of Nasrec, reason would prevail. There was hope that the party that led the crafting of far-reaching land legislation and whose ministers had over the years received billions in budgets for this project would realise that the problem did not lie with our founding document.

No such luck. As soon as the year began, the ANC went to Parliament and backed a motion that the Constitution should be violated for populist purposes. What followed was a whipping up of the emotions and the raising of the expectations of South Africa’s poor as the parliamentary committee tasked with looking at the amendment of section 25 criss-crossed the country.

This week, this assault on the Constitution for political expediency was given the official stamp. President Cyril Ramaphosa addressed the nation and effectively pronounced that the Constitution was actually not as sacred as he had told us it was all along.

His “address to the nation” was itself a slap in the face for democratic norms. This national address, in fact, was Ramaphosa speaking as an ANC leader, with ANC flags fluttering behind him, about the outcomes of an ANC meeting. If ever there was a blurring of lines by someone who made us believe he was made of purer stuff than his predecessor, this was it.

After couching his statement in constitutionally acceptable sentiments and padding it with some caveats, Ramaphosa announced that the ANC had decided to disregard the parliamentary process on the land debate whose first leg is only just ending and push ahead with the amendment regardless of what is still to be heard.

“It has become patently clear that our people want the Constitution to be more explicit about expropriation of land without compensation, as demonstrated in the public hearings,” said the man who seems to be out to prove correct those critics who say he has a backbone of an east European gymnast.

Unless another new decision was made far from the National Assembly, the understanding was that the hearings were just that – an opportunity for the public to state their views; they were not a referendum in which the loudest voices win the day.

Certainly in terms of the ANC’s national executive committee, all that was needed was a headcount and not the substantive arguments put forward.

If indeed the public hearings were a referendum of sorts, is this how we are going to treat our Constitution and our laws from now on? Are we going to subject lawmaking to popular opinion that can be ramped up by interest groups? Are we entering a space where the loudness of the voice trumps reason and logic? Is the governing party of our country heading in a direction in which there shall be rule by mob instead of rule by law?

Are we the society that says a Constitution is just a piece of paper and not something that is so sacred that it can only be tampered with as an absolute last resort?

Are the whims of a majority party, rather than well-developed policies and firm implementation plans, going to determine how we move forward? Is the political security of the Number One citizen, who clearly buckled under the pressure from those who still don’t fully accept his authority, going to be the basis on which far-reaching decisions are made?

What Ramaphosa and the ANC need to realise is that messing with the rule of law is not a case of switching a tap on and off. Once a people have accepted that the Constitution and the rule of law are bendable, there is no knowing where it will stop. Yes, we may never become an exact replica of Zimbabwe, but who could have predicted that we could have put power in the hands of people as allergic to rules as we did during former president Jacob Zuma’s time?

The horrible Zuma era shows that we are still a fragile child who is still very vulnerable to germs in the air and that opportunistic infections can land us in a very precarious situation.

Our democracy needs to be strengthened and not weakened with politically opportunistic decisions. The rule of law needs to be deepened and not undermined by populists. The Constitution that underpins this needs to be cosseted from willy-nilly abuse.

If we do not do this, we will rue the day we took this road. And Ramaphosa will rue the day he became “just another comrade” to protect his political power and the electoral fortunes of his party.