All eyes are on Zimbabwe as the country's Constitutional Court hears the petition lodged by opposition leader Nelson Chamisa in his bid to overturn President Emmerson Mnangagwa's victory in the July 30 elections. Get the live updates here

Last Updated at 10:47
10:45
ShareIcon
Chief Justice Luke Malaba says the law is very clear that an aggrieved candidate in an election has a right to challenge the results within seven days which the respondent should have done within the stipulated period – Frank Chikowore, News24

10:23
ShareIcon
Dali Mpofu and crew inside the court but will not be able to make submissions until a ruling has been made on their case. – Frank Chikowore, News24

10:21
ShareIcon
Chief Justice Luke Malaba lays down the law. Says the lawyers will be accorded 20 min of submission each for main arguments.

10:17
ShareIcon
Chief Justice Luke Malaba spells out how the Constitutional Court hearing will proceed. There are 4 categories of participants: applicant, respondents opposing, respondents supporting, and those who want to be excused. @BrezhMalaba
10:08
ShareIcon
This is what Nelson Chamisa tweeted a while ago.

@BrezhMalaba is tweeting that Nelson Chamisa’s South African lawyers are being denied entry into the Constitutional Court.

09:59
ShareIcon
Chamisa’s local lawyers have just filed an urgent application at the High Court challenging the decision by the justice ministry to bar top lawyers from South Africa, including Dali Mpofu, from practicing in Zimbabwe. (Frank Chikowore, News24)

09:57
ShareIcon
Journalists covering the case outside the courtroom as the Judicial Services Commission gave broadcasting rights to the state broadcaster Zimbabwe Broadcasting Holdings. ZBC is charging US$13 000 for a livefeed (Picture: Frank Chikowore, News24) 09:55
ShareIcon
One of the MDC Alliance lawyers arriving at the Constitutional Court. (Picture: Frank Chikowore, News24) 09:53
ShareIcon
Watch this video of the MDC Alliance lawyers arriving at the Constitutional Court, as tweeted by Al Jazeera’s Haru Mutasa.

Al Jazeera journalist Haru Mutasa says the media has been barred from bringing phones and other recording devices into the constitutional court. Journalists are only allowed to to bring in notebooks and pens.

See pictures of them outside the court, as tweeted by @BrezhMalaba

There is tight security in Zimbabwe’s capital on Wednesday as the Constitutional Court is set to hear the main opposition party’s challenge to the results of last month’s historic presidential election.

Police have barricaded the roads around the court in central Harare as tensions have risen ahead of the crucial court case which will decide if the election of President Emmerson Mnangagwa is valid.

The opposition claims the vote had “gross mathematical errors” and it seeks a fresh election or a declaration that its candidate Nelson Chamisa is the winner of the July 30 vote. – AP

One of the MDC Alliance leaders, who is also a lawyer and was deported from Zambia after attempting to seek asylum, Tendai Biti, has also arrived at the Constitutional Court.

See pictures posted on social media of some members of the judiciary arriving at the Constitutional Court in Harare.

The proceedings are set to start around 10:00, according to @BrezhMalaba

09:11
ShareIcon
One of the President Emmerson Mnangagwa’s lawyers, Munyaradzi Paul Mangwana has also arrived at the Constitutional court, according to a renowned Zimbawean journalist.

09:02
ShareIcon
Many on social media say that Zimbabwe’s Constitutional Court is on trial today to demonstrate impartiality.

A NewsDay report says Zimbabwe’s fate lies with nine Constitutional Court judges, who will preside over the matter which will decide on who will lead Zimbabwe for the next five years.

Meanwhile, New Zimbabwe.com reports that police have banned the carrying of cell phones and other electronic gadgets into the Constitutional Court (ConCourt) premises f.

“The Zimbabwe Republic Police wishes to inform the nation that people who will be attending the Constitutional Court on the 22-23 August 2018 will not be allowed to carry electronic gadgets like cell phones, laptops, cameras or other recording devices,” police spokesperson Senior Assistant Commissioner Charity Charamba is quoted as saying in a statement.

“To avoid unnecessary delays please leave these items elsewhere. Only accredited individuals will be allowed access to the Constitutional Court premises. “We kindly request cooperation with law enforcement agents in that regard.”

SABC is reporting that the Zimbabwe police are on high alert ahead of the election court bid.

The report says that all Zimbabwean police have been recalled from leave to be deployed outside the Constitutional Court and around the country.

Reports on social media indicate that Chamisa’s SA lawyers have arrived in the country for the petition.

Watch the video below in which Chamisa’s spokesperson Nkululekop Sibanda says the lawyers have been accredited to be in court… “an that’s all that matters”.

Ziyambi Ziyambi told state ZBC radio on Monday that the applications arrived after he’d already left his office on Friday. He said he’d written to the lawyers to get them to send the information on Monday, but had only received documents for one of the lawyers – Advocate Jeremy Gauntlett.

But Chamisa’s spokesperson, Nkululeko Sibanda, played down the issue of the South Africans not getting permits.

“When we were talking to them we were clearly aware that the chances of them being allowed to operate in the country were very slim,” he told News24.

He said the MDC Alliance had hired the lawyers for their expertise and not necessarily to argue the case before the court.“The brains and expertise don’t need a visa to operate in the country,” he added.

International monitors largely praised the conduct of the election itself, although EU observers said that Mnangagwa, a former long-time Mugabe ally, benefited from an “un-level playing field”.

The court could declare a winner, call another election, or order a run-off or recount.

The inauguration should take place within 48 hours of the court’s ruling, according to the constitution. – AFP

Derek Matyszak, a legal expert at the University of Zimbabwe, says the opposition faces an uphill struggle given the courts’ historic tilt towards Zanu-PF, which has ruled since independence from British colonial rule in 1980.

“The outcome is pretty predictable,” Matyszak said. “There is absolutely no chance of the election results being overturned.

“The judiciary (is) perceived to be partisan. Once the ruling is made, Chamisa will accuse it of bias and try to make political capital out of it.”

The MDC’s appeal, which was lodged hours before the deadline on August 10, has already forced Mnangagwa’s inauguration – planned for August 12 – to be postponed. – AFP

“To those who voted for Chamisa, I ask you to gracefully accept defeat so that the country can move on.”

The MDC has cited a catalogue of irregularities and discrepancies including more people voting at some polling stations than were registered.

The case, presided over by nine judges at the country’s top court, will be broadcast live on state television. A ruling is expected by Friday. – AFP

08:16
Here is what you need to know about the election petition – according to AFP

Zimbabwe’s Constitutional Court will Wednesday hear an opposition petition seeking to overturn the presidential election result, in a legal challenge seen as unlikely to succeed despite allegations of vote fraud.

The Movement for Democratic Change (MDC) has accused the ruling Zanu-PF party and the election commission of rigging the July 30 vote, Zimbabwe’s first poll since the ousting of Robert Mugabe last year.

Mugabe’s successor, Emmerson Mnangagwa, won with 50.8% of the vote – just enough to avoid a run-off against the MDC’s Nelson Chamisa, who scored 44.3%.

“We have a very strong case and we are going to reverse the electoral fraud,” Chamisa told reporters this week.

“We are going to defend your vote, our vote, the people’s vote. We have no doubt that victory is certain.”

Mnangagwa, who has vowed to turn around Zimbabwe’s ruined economy, hoped the elections would draw a line under Mugabe’s repressive 37-year rule.

The election campaign was more open than previous votes, but was marred by the army opening fire on protesters, killing six, allegations of vote-rigging and a crackdown on opposition activists.

“I won the court case before it began,” Mnangagwa said on the sidelines of a regional summit in Namibia at the weekend.

“It’s declared free and fair… why would I ever think that I will lose?” 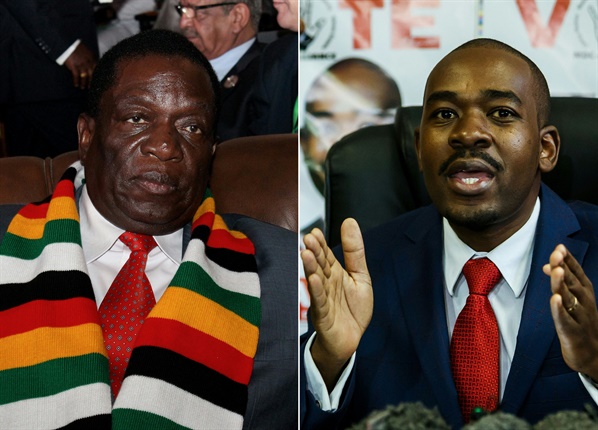 The privately-owned NewsDay reports that the Africa Judges and Jurists Forum (AJJF) has dispatched senior judges and jurists to observe the court challenge.

“The Africa Judges and Jurists Forum will be represented by secretary-general Martin Masiga from Uganda, Retired Chief Justice Earnest Sakala of Zambia and Justice Isaac Lenaola from the Supreme Court of Kenya,” Arnold Tsunga, Africa director at International Commission of Jurists is quoted as saying.

Zimbabwe’s Constitutional Court is on Wednesday set to hear the petition lodged by opposition leader Nelson Chamisa in his bid to overturn President Emmerson Mnangagwa’s victory in the July 30 elections.

The MDC seeks a fresh election or a declaration of Chamisa as the winner of the July 30 vote, according to AP.