South Africa would be ready to assist Zimbabwean President Emmerson Mnangagwa with a commission of inquiry into the post-election shootings of protesters if needed, international relations minister Lindiwe Sisulu has said. 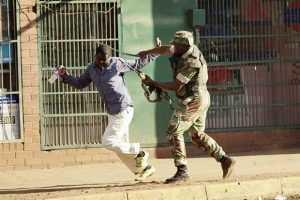 Responding to questions at her monthly briefing to journalists on Monday, Sisulu said South Africa “normally gets requests from [the Southern African Development Community] when judges are required” to be part of a commission of inquiry, but there “hasn’t been any formal request” from Zimbabwe as yet.

If Mnangagwa were to ask, “South Africa will be ready to give them, because we are concerned that what started off as a peaceful election process turned into an unfortunate incident”, she said, with reference to Zimbabwean soldiers killing at least six people during a protest in the centre of Harare two days after the elections. Some of the people killed were not protesters, but got caught up in the march.

In his inauguration speech on Sunday, Mnangagwa again said he would institute a commission of inquiry to establish who gave the order for soldiers to get deployed to contain the protest.

This echoed remarks he made soon after being declared the winner of the elections, just over two weeks ago. At the time he promised that he would bring in experts from outside the country too to sit on the commission, to ensure fairness and credibility.

Sisulu said she hoped the commission could indicate to SADC what went wrong on that day. “We are very glad that President Mnangagwa has indicated that he would appoint a commission of inquiry.”

President Cyril Ramaphosa attended Mnangagwa’s inauguration on Sunday, and Sisulu said South Africa congratulated the people of Zimbabwe “for having made the transition into a new government”.

Opposition MDC Alliance candidate Nelson Chamisa has, however, challenged the results, claiming that the election was rigged. He is set to approach the African Commission on Human and People’s rights after a Zimbabwean court ruling on the matter went against him.