WASHINGTON (Reuters) - The U.S. government will not lift sanctions against Zimbabwe until the new government of President Emmerson Mnangagwa demonstrates it is “changing its ways,” a senior U.S. economic official told a congressional panel on Thursday. 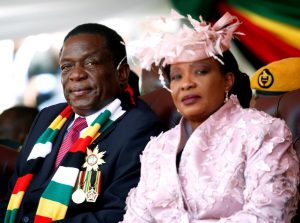 FILE PHOTO: Zimbabwe’s President Emmerson Mnangagwa and his wife Auxillia look on during his inauguration ceremony in Harare, Zimbabwe, August 26, 2018. REUTERS/Philimon Bulawayo/File PhotoManisha Singh, the U.S. Assistant Secretary of State for Economic and Business Affairs, told a House of Representatives hearing there were 141 entities and individuals in Zimbabwe, including Mnangagwa and former president Robert Mugabe, that are currently under U.S. sanctions.

“Our pressure on Zimbabwe remains in place. We are trying to use this pressure to leverage political and economic reforms, human rights observations,” Singh said.

“We want to see fundamental changes in Zimbabwe and only then will we resume normal relations with them,” she added.

Mnangagwa was sworn in as Zimbabwe’s new president on Aug. 26 after the Constitutional Court confirmed his July 30 election victory, dismissing a challenge by opposition leader Nelson Chamisa.

Mnangagwa has called for the lifting of U.S. sanctions against officials from the ZANU-PF ruling party, top military figures and some government-owned firms, which were imposed during Mugabe’s rule for it called violations of human rights and democracy.

The EU lifted most of its sanctions in 2014, but has maintained those against Mugabe and his wife Grace.

The July ballot was touted as a crucial step toward shedding the pariah reputation that Zimbabwe gained under Mugabe as well as securing international donor funding.

Rep. Karen Bass, a Democrat from California, said Zimbabwe was “trying to reach out to us now and I want to know where we are with that.”

“We are always open to conversations. We are open to a demonstration from the government that it is changing its ways, that it is observing human rights,” Singh added.