HARARE - The death toll from a cholera outbreak in Zimbabwe has risen to 24 with first-line antibiotics struggling to treat the disease which has spread from the capital, a World Health Organisation (WHO) report said on Thursday. 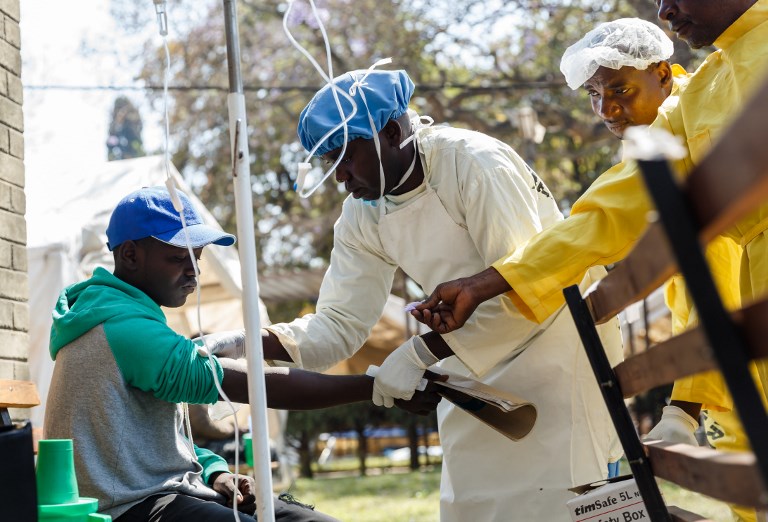 A nurse takes care of a cholera patient during a visit of Zimbabwe Minister of Health, at the cholera treatment centre of the Beatrice Infectious Diseases Hospital, in Harare, on September 11, 2018. At least 18 people have died over the past week in the Zimbabwe capital Harare and scores fallen ill after a cholera and typhoid outbreak in some areas, authorities said on September 10, 2018.

“A cumulative of 24 deaths were reported from the onset of outbreak,” the report said, with 23 deaths in Harare and one death in the southeast district of Masvingo.

“There is resistance to the first-line medicine,” it added, with tests suggesting antibiotic drugs ciprofloxacin and ceftriaxone could be ineffective and the alternative drug azithromycin was not available.

“Relevant medicines should be purchased as a matter of urgency as soon as resistance patterns have been ascertained,” the situation report from WHO and the health ministry recommended.

The cholera outbreak, first detected in the township of Glen View outside Harare on September 5, has prompted the health ministry to declare an emergency in the capital.

With 1,901 suspected cases so far, the disease has spread to other towns as well as rural areas across the country.

The ban could affect a rally by the main opposition on Saturday where the party planned a mock inauguration for its leader Nelson Chamisa whom supporters say was robbed of victory in elections on July 30.

Cholera outbreaks have occurred regularly in Zimbabwe’s cities where supplies of potable water and sanitation facilities are scarce.

Informal housing areas without running water have mushroomed, and basic infrastructure has collapsed due to years of neglect.

Tests from some wells and boreholes showed water was contaminated with cholera and typhoid-causing bacteria.

Zimbabwe, which was ruled by Robert Mugabe from independence in 1980 until his ousting last year, suffered its worst cholera outbreak in 2008.

President Emmerson Mnangagwa, who succeeded Mugabe, has pledged to tackle the current outbreak.