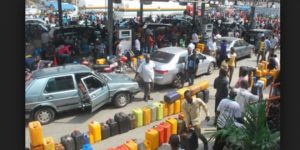 Ten days away from Zimbabwe may as well have been a  decade for the feeling I got the moment I returned home. It was  like 2008 all over again. It started at the border post.

When I saw the line of vehicles parked on the side of the highway and stretching as far as the eye could see, I started counting. Twenty, fifty, one hundred, two hundred and still it continued but then the road got narrower because the vehicles were parked in two lines, all trying to get through one gateway. This was not a fuel queue it was a five kilometer queue of two hundred and sixty five trucks at the Machipanda border post in Mozambique;  trucks with Zimbabwean number plates all  waiting to re-enter Zimbabwe. Trucks carrying food, fuel and goods that Zimbabwe needs to survive. The irony of why we need to be importing so much food and other goods when we were always known as the breadbasket of Africa is not lost on you as you crawl past the huge trucks and eventually get into the border post buildings.

The queue of trucks and fuel tankers stuck in the no- man’s land between Mozambique’s Machipanda and Zimbabwe’s Forbes border posts is a nightmare. Grid lock after someone tried to push into the line leaves everyone unable to move.  I close my eyes and the images of a brief time away flash through my mind: laughing children fishing and splashing in roadside pools; dugout canoes with home-made plastic sails heading out to sea on a receding tide; yellow billed kites circling in a deep blue sky.  Africa, such a beautiful continent but so much pain and hardship.

At Forbes Border post in Zimbabwe  I ask an official if they know that there are 265 trucks waiting to come through in a queue five kilometers long. “We know!” he sighs, “it’s the paperwork.” Paperwork indeed I thought as I waited to pay my “carbon tax”; taxes, duties and levies make a mountain of paperwork.

Town after town through Zimbabwe the queues are massive, not of trucks anymore but of ordinary people trying to get fuel for their cars. Hundreds and hundreds of cars wait at every filling station, queuing for hours, just as we did in 2008.  No police in sight to control the nightmarish traffic around the fuel queues or the queue jumpers who push in at the slightest gap in the line. Then comes the really scary situation when you actually stop and go into a shop. Pharmacies that are still open haven’t got most medicines and will only accept US dollar cash: no debit cards, no bond notes, no bank transfers. Shortages I wrote about a month ago have reached chronic levels now. People are desperate for life preserving drugs including insulin, blood thinners, heart medication but there is none. With shaking hands and tear filled eyes they ask: “what am I going to do?” but there aren’t any answers.

In some grocery stores all the price stickers have gone and prices have doubled, tripled and quadrupled in the past ten days. A bottle of cooking oil has gone from $4 to $15 dollars in the past ten days. In other supermarkets there are gaping empty shelves where the basics are no longer available: no cooking oil, flour, sugar, rice and everywhere people are panic buying; bulk buying as much as they can afford, as much as the shop will let them buy because many products are limited to one or two per customer. This is exactly how it was in 2008 and the fear we felt as Mums and Dads, when we put our children to bed hungry at night or couldn’t put a sandwich in their school lunchbox, has come back very fast.

Zimbabwe’s government did not help the massive currency shortage crisis when they announced a new 2% tax on all electronic payments above $10 including from debit (swipe) cards; mobile phones, and bank transfers . President Mnangagwa said the new tax was a painful but necessary part of economic recovery but when the Congress of Trade Unions tried to hold a peaceful protest to demonstrate against the new 2% tax, their top officials were arrested and riot police poured out onto the streets again.

Every day news comes of more and more companies closing their doors and suspending trading because of the huge black market rate for US dollars and their inability to price and restock their products.  One US dollar bank note is  worth three dollars eighty  in a bank account today but tomorrow the rate will change again and so panic and un certainty grows. Every day we pretend to be normal but that’s all it is, a pretence, how can it be otherwise when you cannot be assured of medicine, food, fuel or your own safety should you dare to be brave enough to take part in  a peaceful protest?

Then came the much awaited report from the European Union Election Observer Mission on Zimbabwe’s 2018 elections. One statement in 67 pages speaks volumes : “The final results, as announced by the Electoral Commission, contained numerous errors and lacked adequate traceability, transparency and verifiability.”  There are no answers as to how election results that are not traceable, transparent or verifiable can be acceptable anywhere in the world.

Until next time, thanks for reading this letter and my books about life in Zimbabwe describing how we got to this frightening place we are in again, love cathy.