Reports of arbitrary arrests and beatings by police 11 months into the ‘new dispensation’- demonstrate that the Emmerson Mnangagwa led administration has failed to give human rights sufficient priority in its agenda for reform. 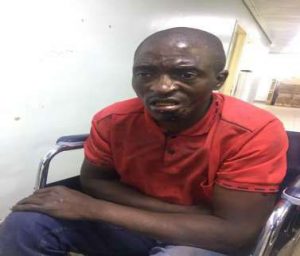 James Chamisa, a vendor who was recently assaulted by police in Harare’s CBD.

Daily running battles of police, vendors and drivers of commuter omnibuses who are being forced
out of Harare’s central business district (CBD) have brought business to a standstill.
A video clip showing Zimbabwe anti-riot police officers beating a Harare based vendor identified as
James Chamisa has gone viral. In the video, baton -wielding riot police officers throw Chamisa into a
police truck where he was assaulted by police.  Chamisa is currently receiving treatment at a local hospital under heavy police guard.

In a separate incident, CiZC Advocacy Officer, Conrad Gweru was brutalized by armed police who accused him of taking pictures of them assaulting public commuter crews in the capital. He was detained for two nights and is currently out on bail after the State charged him with disorderly conduct.

Continued disregard of fundamental rights and freedoms by the government is a cause for major concern as the government is supposed to protect all its citizens, irrespective of socio, economic and political standing.

Unfortunately, Home Affairs deputy minister, Mike Madiro, recently said that government was unapologetic about the manner in which law enforcement agents were dealing with vendors and commuter omnibus drivers resisting the order to move out of Harare’s CBD, which has resulted in daily running battles.

Madiro defended the police, saying they we doing their job, adding that vendors should not take the law into their hands, but must abide by the law to avoid clashes with the police.
“The Constitution gives authority to the police to take such action. Police are not going to stop, but we are urging people to go to places that are designated and sell their goods. Vendors should follow the law and not take the law into their hands,” he said.

Vendors Initiative for Social and Economic Transformation Director Samuel Mangoma indicated that the action taken by police is against the letter and spirit of the constitution.

“It’s against the letter and spirit of the constitution. As VISET we are opposed to any intervention by the Government, including evictions, that doesn’t take into consideration the livelihoods of the people. “We are in the streets not because we enjoy being street traders but a man has to live.
Whatever the challenges we are facing as a country dialogue should be the modus operandi, violence begets anarchy and confusion. We are ready to be party and parcel of all interventions that will bring about a peaceful resolution of the challenges we are facing as the informal economy,” he said.
In a recent statement, Crisis in Zimbabwe Coalition (CiZC) condemned the use of excessive force by the police in handling civilian affairs. “Crisis in Zimbabwe Coalition (CiZC) has noted with concern the continued use of excessive force by the government of Zimbabwe in handling civilian affairs. The police and the army continue to use force against unarmed civilians seeking to eke a living out of vending in a failed economy.