HARARE - The Zimbabwe government is to vaccinate over a million citizens against cholera. 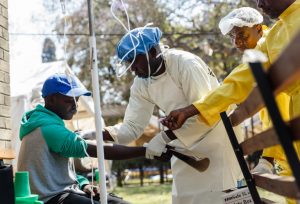 A nurse takes care of a cholera patient during a visit of Zimbabwe Minister of Health, at the cholera treatment centre of the Beatrice Infectious Diseases Hospital, in Harare, on September 11, 2018.
At least 18 people have died over the past week in the Zimbabwe capital Harare and scores fallen ill after a cholera and typhoid outbreak in some areas, authorities said on September 10, 2018. / AFP PHOTO / Jekesai NJIKIZANA

The waterborne disease has so far killed 49 people, and infected 10, 000 in recent weeks.

The World Health Organization has provided over 500, 000 vaccination doses and more are expected.

There have been long queues at most vaccination centres in the suburbs, with residents hoping to stop the disease in its tracks.

The authorities have banned public gatherings in Harare in a bid to thwart the spread of cholera but main opposition leader Nelson Chamisa lays blame for the outbreak at government’s feet. The Zimbabwe government is to vaccinate over a million citizens against cholera. The waterborne disease has so far killed 49 people, and infected 10, 000 in recent weeks.